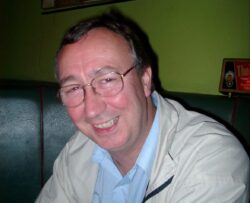 A ‘careful’ motorist gasped ‘oh my God’ as a drunk driver in a BMW careered into him head-on leaving him fatally injured.

William Ludlow, 65, was cut out of his Nissan with catastrophic chest and abdominal injuries by firefighters and died two days after the crash on Willaston Road in Neston, Cheshire.

Liverpool Crown Court was told that Andrew Stinchcomb, 40, was still more than twice over the legal alcohol limit when tested six hours later as he was jailed for 56 months yesterday.

Mr Ludlow’s widow and son were in court to hear that the drivers were approaching a bend from opposite directions on the 50mph road.

Carol Slater, a passenger in the pensioner’s car, heard him say ‘oh my God’ as the BMW 3 Series with a flat tyre veered into their lane and appeared ‘on top of them’.

Mr Ludlow was a ‘good driver who always drove carefully’ but ‘did not have any chance of avoiding’ the collision as the other car was ‘directly in front of them’, she told officers.

Both drivers were airlifted to hospital after being cut free but Mr Ludlow died two days later on July 28, 2021 at the Royal Stoke Hospital.

Stinchcomb told police he was a ‘safe and considerate driver’, but admitted at the scene he had been ‘drinking spirits’.

The dad-of-two from Marshlands Road in Little Neston said he had dropped his children at school that morning before buying beer from an off-licence to drink on a beach.

He told the wife of a driver who stopped at the scene he had had ‘a couple of drinks’ and she told the court he was ‘travelling far too fast’.

When tested later he still had 165 micrograms of alcohol in his system per 100ml of blood – the legal limit being 80mg.

Mr Ludlow’s wife and son held hands as Judge Stuart Driver KC passed sentence on Stinchcomb who looked tearful and appeared to be shaking in the dock.

Judge Driver paid tribute to Mr Ludlow as a ‘well-loved family man’, adding: ‘The loss to his relatives and friends cannot possibly be calculated.’

‘Your family, including your two young children, will be separated from you for a long time,’ he told Stinchcomb who admitted causing death by dangerous driving.

‘Mr Ludlow’s family have been entirely bereaved of him.

‘You have shown true remorse and pleaded guilty at the earliest opportunity.

‘I thank Mr Ludlow’s family for the dignity shown in these proceedings.’

Stinchcomb nodded to the judge and quietly said ‘thank you’ as the judge jailed him and banned him from driving for six years and four months.

Those were the pensioner’s last words before he died in hospital, according to a passenger.