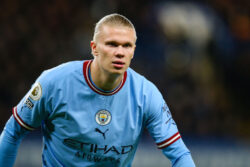 Paul Merson has urged Manchester United to ‘break the bank’ and sign Tottenham striker Harry Kane, who he feels is better than Erling Haaland.

The 29-year-old England international is among the best strikers in world football and has registered 265 goals and 62 assists across 412 games for Spurs.

Kane has previously been linked with both United and Manchester City but Tottenham have so far refused to let him leave the club despite his previous desire to move on.

He is currently under contract until June 2024 and would generate a massive transfer fee if he was to leave north London in January or in the summer.

Merson, though, has told United to do whatever they can to sign the superstar striker, who he feels is superior to City’s goal machine Haaland.

‘In an age where clubs spend money for fun and world-class centre-forwards are a rarity, I would find it crazy if Manchester United did not break the bank for Harry Kane,’ he told the Daily Star.

‘You can look all around the world, rack your brains and round up every scout within your network and the answer is right there in front of you. There is nobody that comes close to Kane that is currently available.

‘If United ever want to catch Manchester City, they’ve got to go and get Kane. Everybody wants a striker and is searching far and wide but the best centre-forward is staring everybody in the face.

‘He plays for a team in Tottenham that are going to win absolutely nothing and surely, sooner or later his head is going to be turned by a move again.

‘I don’t know what I’m missing here. Even if he costs £150million and it’s a four or five-year contract, you are buying over 100 goals. Who else is going to give you that?

‘Everyone talks about Erling Haaland but for me, Kane could deliver similar numbers in that Manchester City team and even add more assists.

‘Call me silly but Kane would even give United a chance of winning the Champions League in my opinion.

‘He is a machine. Tottenham are only where they are because of Harry Kane, it really is that simple. He is the difference.’