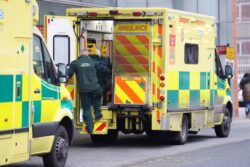 A patient waited for ’99 hours’ on a gurney for a bed after arriving by ambulance (Picture: PA)

An A&E patient was reportedly forced to wait for four days on a gurney before receiving a bed last week.

The unnamed patient was brought to Swindon’s Great Western Hospital by ambulance, but ‘had to wait for 99 hours’ whilst staff desperately tried to find a bed.

A clinician at the hospital told The Sunday Times: ‘We are broken and nobody is listening.’

Another NHS worker said: ‘We are now at the stage where there is not enough oxygen in cylinders to treat patients in corridors, ambulances and in our walk-in area in A&E.’

Jon Westbrook, the hospital’s chief medical officer, wrote in a leaked email to staff: ‘We are seeing case numbers that we have not seen previously in our clinical careers.’

The full extent of the pressure on NHS has become clear, as dozens of trusts have declared critical incidents in the past three days.

A seriously ill three-year-old girl was pictured curled up asleep on a plastic chair at the children’s A&E department of John Radcliffe Hospital in Oxford after waiting hours to be treated.

Tom Hook, the young girl’s dad, shared the image on social media and wrote: ‘Exhausted, dehydrated and fighting multiple illnesses, this is the best the NHS could do, five hours after arriving at A&E and 22 hours after we phoned for help.

‘The staff throughout were fantastic and clearly doing a nearly impossible job in a broken system that just channels everything to A&E – which then can’t cope with the demand.’

Record numbers of patients are now being nursed in corridors as emergency departments have become ‘grossly overcrowded’.

Hospitals are being forced to cancel operations, with staff having to work in departments they are unfamiliar with.

There is even a shortage of portable oxygen amid the increasing spread of respiratory illnesses, including Covid and the flu.

NHS Trusts in Merseyside have told patients not to attend A&E unless their condition is ‘life-threatening’, with hospitals facing extreme demand this winter.

A patient at Royal Liverpool Hospital told the Echo: ‘There was a woman in the waiting room who was vomiting into bowls, but there were no staff around to help her so other members of the public were helping her to clear it up.

‘We were told by a staff member that there was a 30-hour wait for a bed. He had a big three-page list of all the people who were waiting for a bed.’

‘We are broken and nobody is listening.’