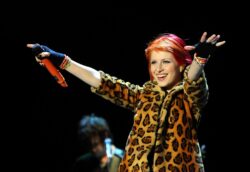 Hayley and co. are coming back to the UK for the first time since 2018 (Picture: Simone Joyner/WireImage)

It’s finally happening – after years of quietly preparing their new album, Paramore are coming back to the UK and Ireland in 2023.

The American rock band, who returned with new single This Is Why last month, will return to the UK and Ireland for six shows, after they last toured here in 2018.

Their upcoming album, also titled This Is Why, will be released in February, just before their upcoming tour is scheduled to begin.

Tickets will be going on general sale on the morning of Friday, October 28.

Then, the tour will start in Dublin on April 13, before travelling over the Irish Sea to Great Britain, where Hayley Williams and co. will set up shop in Cardiff on April 15.

There’s no word yet on prices, but if the recent sale for Blink-182’s reunion tour is anything to go by, fans are going to have to start saving now.

Paramore fans who purchase (or have already purchased) pre-order bundles for This Is Why will be eligible for pre-sale on October 26 at 10am.

A portion of the ticket sales will be donated to the charity Support + Feed, an organisation that ‘takes action for a global shift to an equitable, plant-based food system.’

Paramore will be hitting the stage as a trio once again after singer Hayley Williams and multi-instrumentalist Taylor York were re-joined by drummer Zac Farro.

The band released their debut album, All We Know is Falling, in 2005, which was followed by their breakout record Riot! in 2007.

Misery Business, the lead single from that album, then shot the band to worldwide fame, alongside Twilight soundtrack song Decode.

Their third album, Brand New Eyes, was released in 2009 before the band took a four-year hiatus, returning with their self-titled album in 2013.

After Laughter, their most recent record, was made available in 2017. Since then, the band have been exploring other musical ventures.

Williams, 33, released two solo albums, Petals For Armor in 2020 and Flowers for Vases in 2021, along with critically acclaimed single, Simmer.


MORE : Multiple women allegedly sexually assaulted at Paramore gig as band apologises to fans: ‘Our shows are meant to be a safe place’

Get that orange hair-dye out and start back-combing your hair now.