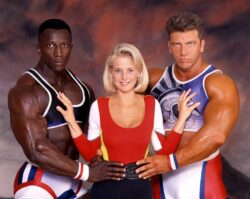 Gladiators is finally returning to BBC One next year (Credits: ITV/Shutterstock)

Team GB long jumper Stef Reid has put herself forward to be the first ever ‘bionic’ Gladiator when the hit challenge show returns to BBC in 2023.

Reid, who had her right leg amputated after a boating accident aged 15, won the silver medal at London 2012 and has now revealed she wants to be part of the toughest and strongest team of TV athletes, following the likes of legends Lightning, Wolf and Jet.

And she already has a name in mind – Blade, referring to her prosthetic leg.

‘I had three ambitions growing up — winning an Olympic medal, starring in a movie and, lastly, being a Gladiator, which is the only one I’ve yet to achieve,’ she said.

Speaking to The Sun, she added: ‘I was a huge fan of the show as it was one of the rare occasions you could see both male and female athletes competing on the same stage.

‘And I was also in awe of the women because they were strong and athletic with muscles. They were a real inspiration.’

It wouldn’t be Stef’s first brush with primetime TV after coming in sixth place on the 2022 series of Dancing on Ice where she proved once again she was a tour de force.

Her announcement comes after Wolf – real name Michael Van Wijk – appeared on Good Morning Britain on Thursday with his son Dean, who has also applied to join the Gladiators line-up.

‘I’d be ready to do it tomorrow!’ he told hosts Ben Shepard and Kate Garraway, while sat next to his Gladiators father.

The BBC confirmed Gladiators would be returning on its new channel earlier this year, with the likes of Alex Scott, Holly Willoughby and Bradley Walsh all tipped to be replacing Ulrika Jonsson and John Fashanu as hosts.

Gladiators originally ran form 1992 to 2000 on ITV, regularly drawing in over 10 million viewers.

A brief revival aired on Sky One but was cancelled after one series.

Gladiators returns to BBC One in 2023.

Gladiators will finally be returning to TV in 2023.