Paloma Faith says she’s a ‘broken woman’ and thanks fans for support after ‘split’ from partner: ‘2022 was s**t 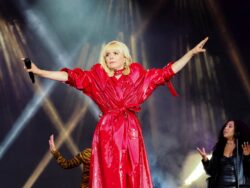 Paloma Faith has thanked fans for their support throughout 2022, branding the year ‘f*****g s**t’.

Revealing that she had just arrived in Rome with her two kids, the hit-maker described herself as a ‘broken woman’ but insisted she had ‘good feelings’ about 2023.

In November, it was reported that Faith had split from her long-term partner Leyman Lahcine after nine years together.

In a now-expired Instagram post seen by MailOnline, Faith wrote: ‘Omg I am a broken woman getting two kids to Rome alone but I’m here and I’m very dishevelled and I am grateful for everyone who supported me in 2022 cause it was f**king s**t!’

She added: ‘But I’ve got good feelings about next year! Good times are coming.’

Paloma reportedly admitted that she and Lahcine had gone their separate ways following an almost decade-long romance at Jonathan Ross’ annual Halloween bash.

The hit-maker called herself a ‘broken woman’ on Instagram (Picture: Instagram/palomafaith)

A source said at the time: ‘Paloma and Leyman have ended their relationship and she is very much single.

‘She was living her best life at Jonathan’s party and was the life and soul of the bash.’

They added to The Sun: ‘Things between Paloma and Leyman became strained over the past year and they’re no longer together – although they co-parent their children together. Everyone was pleased to see her so happy after a tough few months.’

The pair are thought to have tied the knot in 2017 but never confirmed the reports (Picture: David M. Benett/Getty Images)

Paloma and Lahcine first started dating in 2013 and have two daughters together, who are five and one.

It’s thought that the pair tied the knot in 2017 but they have never confirmed it.

While they’ve kept their family life private, Paloma previously opened up about her and Lahcine’s relationship to Sunday People in 2016.

She shared: ‘Leyman is my husband. You don’t need a marriage certificate. He’s part of my hareem! There are seven of them. We don’t argue. We are very similar characters.’

Leonardo DiCaprio, 48, soaks up the rays with mystery woman on board luxury yacht

The doting mum went on: ‘We respond to things in the same way and just talk about things. If somebody says, “you’ve hurt me”, I say “I’m really sorry I didn’t mean to”. I’m not ever saying no to marriage… and I have wanted a baby since I was 27.’


MORE : Romeo Beckham and Mia Regan continue their loved-up display with all the PDA in cute photo booth snaps


MORE : Billie Eilish reflects on ‘hating herself’ as teenager and struggling with body issues in history-making Vogue cover

Hopefully 2023 has better things in store.