Pakistan acquits all policemen in killing of aspiring male model 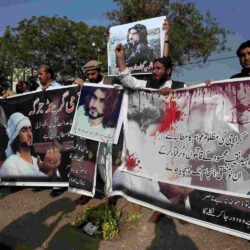 Pakistan acquits all policemen in killing of aspiring male model

A court in Pakistan acquitted a retired senior police officer and 17 others, mostly still serving cops, in the 2018 killing of an aspiring model.

Naqeeb Ullah, a 27-year-old aspiring male model, was killed under suspicious circumstances, in what police at the time said was a raid on a militant hideout in the port city of Karachi.

Rao Anwar was Karachi’s police chief at the time, and Anwar along with the others, they were arrested soon after the raid and went on trial in 2019. A government probe concluded that Naqeeb Ullah had no ties to militants.

An attorney for Ullah’s family said the court in Karachi acquitted Anwar and the others due to a lack of evidence after the prosecution failed to prove the charges raised against them. He said he would consult the family and may file an appeal.

Ullah’s family claim he was arrested weeks prior to his killing and the alleged raid was staged as a “fake shootout.”

Anwar had jailed scores of militants while he was police chief. He was suspended following the raid and barred from leaving Pakistan, during the trial he retired from service.

After the court’s ruling on Monday, Anwar said “justice has been done” and announced he will be demanding to be reinstated because of a wrongful suspension.