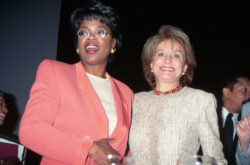 Walters has been described as a ‘true legend’ and a ‘trailblazer’ (Picture: Mitchell Gerber/Corbis/VCG via Getty Images)

Oprah Winfrey and The View presenters are among the stars who have paid tribute to Barbara Walters following her death, with the late broadcaster dubbed a ‘true legend’.

On Saturday December 31, it was confirmed that the trailblazing journalist and TV personality had died at the age of 93.

Her representative Cindi Berger said in a statement: ‘Barbara Walters passed away peacefully in her home surrounded by loved ones. She lived a big life.

‘She lived her life with no regrets. She was a trailblazer not only for female journalists, but for all women.’

Numerous people have rushed to pay their respects to the pioneer, who co-created The View and starred on the panel show when it premiered in 1997.

Winfrey, 68, shared a photo of herself with Walters, saying that without her, she wouldn’t have been where she is in her career today.

‘Without Barbara Walters there wouldn’t have been me – nor any other woman you see on evening, morning, and daily news. She was indeed a Trailblazer. I did my very first television audition with her in mind the whole time,’ she wrote on Instagram.

Former The View host Jenna McCarthy thanked Walters for her ‘love, guidance, support, nurturing’ and for ‘making a seat for me at “the table”’.

‘Your impact on the world is immeasurable,’ she penned. ‘Your impact on me will never be forgotten. You will forever be an icon, in every sense of the word, and a most beloved friend to me. Love you always, Jenny. Rest peacefully. 🙏🏻💔🕊️ #ripbarbarawalters.’

Meghan McCain, who was on the talk show from 2017 to 2021, stressed that Walters will ‘always be known as a trail blazer’.

‘Her hard hitting questions & welcoming demeanor made her a household name and leader in American journalism. She was the ultimate ceiling breaker for women in television for which we all were lucky enough to follow,’ she stated.

‘Her creation of The View is something I will always be appreciative of. Rest in peace, you will forever be an icon.’

Star Jones, who was on the programme from the start in 1997 until 2006, added: ‘I owe Barbara Walters more than I could ever repay. Rest well sister… mother… friend… colleague… mentor.’

I owe Barbara Walters more than I could ever repay. Rest well sisterâ¦motherâ¦friendâ¦colleagueâ¦mentor.

Wonder Woman star Lynda Carter shared a throwback clip of herself being interviewed in Barbara’s company, describing the late broadcaster as ‘an American institution’.

‘As the first female national news anchor, she opened the door to endless possibilities for so many girls who wanted to work in TV, myself included. Her impact cannot be overstated. I’ll miss you, Barbara. Thank you for everything,’ the actress wrote.

X-Men actor Hugh Jackman paid tribute on behalf of himself and his wife Deborra-Lee Furness, as he said: ‘Deb & I are so sad that Barbara Walters passed away. She was a trail blazer, wickedly funny, generous, open hearted and a good friend.

‘She also gave some of the most memorable dinner parties we’ve ever been to. Get ready heaven, Barbara’s coming to spice things up.’

Deb & I are so sad that Barbara Walters passed away. She was a trail blazer, wickedly funny, generous, open hearted and a good friend. She also gave some
of the most memorable dinner parties weâve ever been to. Get ready heaven, Barbaraâs coming to spice things up. @Deborra_lee pic.twitter.com/pQfLSG5m7a

Disney CEO Robert Iger lauded her as a ‘true legend’ and a ‘pioneer not just for women in journalism but for journalism himself’.

Remembering Walters as a ‘one-of-a-kind reporter who landed many of the most important interviews of our time’, he added: ‘I had the pleasure of calling Barbara a colleague for more than three decades, but most importantly, I was able to call her a dear friend.

‘She will be missed by all of us at The Walt Disney Company, and we send our deepest condolences to her daughter, Jacqueline.’

I have sad news to share today. Barbara Walters passed away this evening at her home in New York. pic.twitter.com/fxSyU6BQk4

Walters was born in Boston on September 25 1929, and grew up in New York, before graduating from Sarah Lawrence College with a degree in English.

She launched her TV career in 1961 with a job as a writer and researcher at NBC’s Today show before ​​becoming the programme’s first female co-host alongside Hugh Downs and Frank McGee.

Following her departure from NBC, she took on a job as co-anchor on ABC Evening News in 1976 and three years later, joined the network’s feature programme 20/20, which allowed her to interview individuals including Michael Jackson, Richard Nixon, Vladimir Putin and Monica Lewinsky.

She and Guber adopted a baby daughter called Jacqueline during their marriage.

Walters and ADelson were divorced in 1984, before reconciling and exchanging their vows in 1986, although they were divorced again in 1992.


MORE : Barbara Walters’ most memorable interviews, from questioning The Kardashians about their ‘talent’ to grilling Donald Trump

The late journalist has been described as a ‘true legend’ and a ‘trailblazer’.