Quick Summary
The Independent reports on Liz Truss’s energy plans and how they show the UK has abandoned its net zero targets. 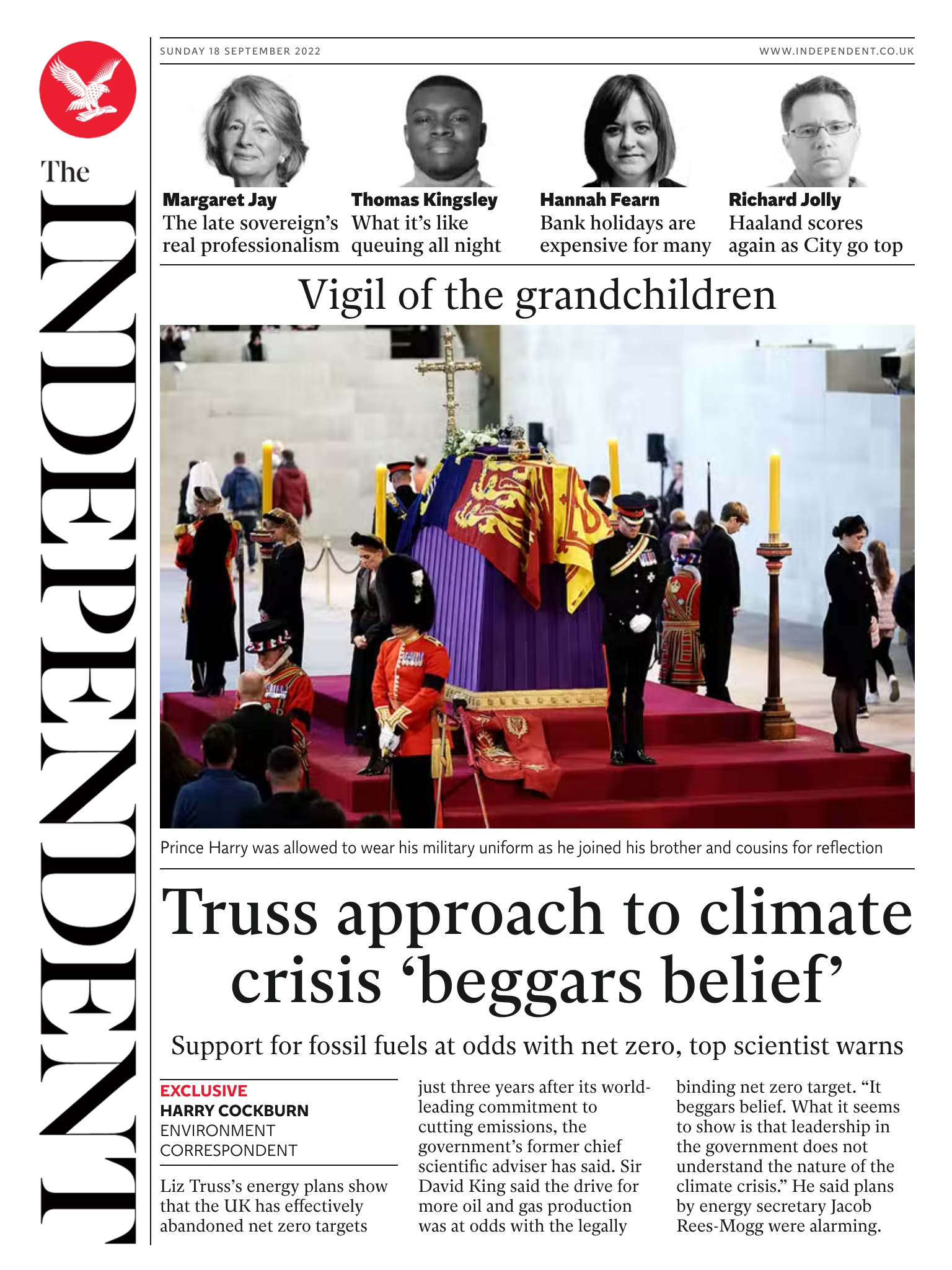 This week’s Sunday Papers are heavily dominated by royal news. The Independent splits its front page to cover reports on Liz Truss’s energy plans and how they show the UK has abandoned its net zero targets, as well as yesterday’s vigil by the Queen’s grandchildren.

Mother and son, 10, found dead in flat after ‘concerns for welfare’

The Independent says A woman and a child, believed to be mother and son, have been found dead inside a flat.

The discovery of the woman, believed to be 30, and her 10-year-old child was made after police were called to an address in Cross Ingram Road, Holbeck, Leeds, on Thursday.

West Yorkshire Police said officers were called at about 9pm to the flat.

The force said an alert was made by someone who raised concerns about the welfare of the occupants, and a woman and a child were found dead inside the flat.

The Independent says In the summer of 2020, as an obscure conspiracy ideology called QAnon began growing in prominence, then-president Donald Trump said he hadn’t really heard of the movement, but though its supporters were patriots and should be praised for backing his administration.

“I’ve heard these are people that love our country,” he said at a White House press briefing that August. “I don’t really know anything about it, except that they do supposedly like me,” he added.

The president didn’t seem deterred when a reporter laid out just how outlandish the movement’s claims really were: that a cabal of Satan-worshiping paedophile Democrats controlled the “deep state,” and could only be vanquished by Mr Trump.

The Independent says A tsunami warning has been issued by the US authorities after a magnitude 7.2 earthquake struck off the east coast of Taiwan, with initial reports of shaking felt in Taipei.

The tremors from the powerful quake could be felt across Taiwan, the country’s weather bureau said.

This was the second earthquake in less than 24 hours in Taiwan after a 6.4 magnitude tremor rocked the southeastern county of Taitung at around 9.41pm on Saturday.

On Sunday afternoon, the earthquake with a shallow depth of 10 km (6.21 miles) struck 50km north of the city of Taitung, which was already rattled by after-shocks from the previous night, Taiwanese authorities reported.

The Independent says Protests have been taking place across the UK after an unarmed black man was shot dead by police.

Crowds gathered outside New Scotland Yard in a rally against police brutality and institutional racism following the death of Chris Kaba earlier this month.

The crowd of more than 1,000 people brandished placards including “No justice, no peace” and “Fight Police Racism” at the Metropolitan Police headquarters in central London. Other events are being held in Manchester, Southampton and Coventry.

The 24-year-old was fatally shot by an officer on 5 September. He was killed after being involved in a pursuit when the car he was driving was flagged on an automatic camera system indicating it had been involved in an offence.