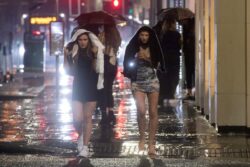 Brits will battle bad weather to celebrate the arrival of 2023 (Picture: SWNS)

Rain, snow and ice could be unwelcome guests at New Year celebrations tonight.

Revellers welcoming in 2023 in the south-west of England and southern Wales face yellow warnings for rain until 9pm tonight.

But partygoers up in the Scottish Highlands will likely see the worst of it, with warnings for ice until 11am and snow until 3pm.

Huge crowds are expected in London as the city hosts its first annual fireworks celebration in three years.

The Met Office has warned of heavy and persistent rain for the capital and the south-east in the day, but says it will likely be drier in the evening.

Thousands will also be hoping the bad weather stays away from Edinburgh’s long-awaited traditional Hogmanay celebrations.

Cloudy skies and some patchy rain has been predicted for the Scottish capital today.

Met Office deputy chief meteorologist Helen Caughey has warned it will be an ‘unsettled’ New Year weekend for much of the UK.

‘New Year’s Eve for most will be the wetter of the two days, with a number of fronts bringing rain and wind across much of the country’, she said.

‘The unsettled weather will stay with us into the evening. Much of Scotland will see a largely dry day, with just the odd shower, before a more persistent band of rain and hill snow arrives.

‘This will be followed by a more mixed New Year’s Day, with Scotland seeing the bulk of the unsettled conditions, with spells of rain, turning to snow over higher ground, continuing to push north.

‘While it will be mild across the south, it will remain colder in the north with an ice risk in places here early on Sunday.

‘Elsewhere, a drier day is expected, although with some showers, mainly across western areas, ahead of conditions becoming more widely settled into Monday.’

The Met Office has urged people to monitor their website or app for any further weather warnings over the weekend.

The first week of 2023 is predicted to bring calmer weather in the south as high pressure will cling on.

Thousands in London will be hoping the rain doesn’t hit during the famous fireworks display (Picture: Alamy Stock Photo)

More unsettled conditions are expected in the north though due to low pressure.

It comes after heavy rain resulted in widespread flooding across southern and central parts of Scotland, bringing travel disruption on Friday.

Forecasters have said the deadly bomb cyclone that sent temperatures plunging in the US over Christmas is causing the unsettled weather in the UK.

Brits will battle bad weather to celebrate the arrival of 2023.