New year, new you: Swap your annual ‘fly and flop’ winter getaway for a wellness retreat 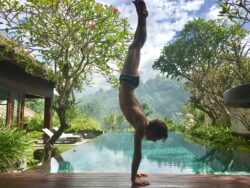 Sweat slowly runs down my face as the heady smell of incense hits my nose. I’ve contorted my body into the most taxing version of Warrior II that I can muster, and my quads are beginning to shake. And then, just as I’m about to admit defeat, booming over the speakers I hear a line from a song that instantly brings a smile to my lips. ‘Baby! I’m hot just like an oven. I need some lovin…’

When I signed up to a yoga retreat in Bali I hadn’t envisaged sweating it out on my mat to Marvin Gaye’s Sexual Healing. Nor, did I expect to be balancing on my head in tripod headstand while the Dirty Dancing soundtrack reverberated around the open-air yoga shala. Turns out, while some elements of a yoga retreat are predictable (lentils, chanting and multiple ‘Oms’), other elements go way beyond the pale.

You might be one of the many who assume that a health retreat is confined solely to a population of young, impossibly flexible, inner-city dwelling, kombucha-drinking, active wear-clad hipsters. But, when I wipe the perspiration from my eyes and look around me, I see the full human gamut: young and old, stick thin and full-figured — clearly I’m not alone in opting for a holiday with wellness at its core

Thanks to a greater focus on physical and spiritual wellness sweeping western society, more and more Brits are forgoing their annual their annual fly and flop, in favour of more meaningful and transformative getaways. And the travel industry is following suit.

Unlike fleeting new year resolutions, wellness is far from a fad. In fact, it’s one of the biggest sectors in travel. Last year’s Global Wellness Tourism Economy report valued the industry at an estimated more than $488 billion, and in 2023, it’s expected to increase even more.

So, whether you have a desire to shift some Christmas kilos, increase flexibility, tone abs, or to implement some much-needed Zen into your day-to-day; kickstart the ‘new year, new you’ ethos and try out one of these holidays with health at their core…

Yoga is big business – close to half a million Brits take a class each week.

Improving flexibility, circulation, alignment and developing strength – there’s plenty of reasons why why should all be hitting the yoga mat. And while there’s a yoga retreat in almost every corner of the globe, if you’re looking for yoga authenticity that it’s hard to trump Rishikesh in India.

Dubbed as the ‘birthplace of yoga’ and the self-styled ‘yoga capital of the world’, this holy city in northern India boasts one of the highest concentrations of ashrams, studios and spiritual retreats on earth. For authenticity, head to the Sattva Yoga Academy.

Offering modern amenities, organic food and an Ayurvedic spa, the centre incorporates the teachings of yoga in a holistic and transformational way.

If you really want to kickstart the new year with holistic fitness in minds, then a head to toe, internal and external tailored wellness program at Banyan Tree Veya Phuket resort in Thailand is the way to do it.

Catering to the volume of visiting wellness warriors, the property has launched its signature rituals and practices. Designed to offer you utmost control to steer your wellbeing journey, more than 40 activities (all are built on Banyan Tree Veya’s eight pillars of wellbeing) have been programmed with a team of both resident and visiting practitioners.

Want to increase awareness, reduce anxiety and be more happy? Meditation could be the answer. And if you’re looking to cultivate some serious inner-serenity, then a silent retreat is a surefire way to do it.

An ancient practice, Vipassana is a form of mental training learned by attending a 10-day residential course. Relieved from distractions – no technology, no books, no TV, and absolutely no talking – there are training centres all over the world, including two in the UK.

‘Sweatcations’ (holidays paired with lots of physical activity) are on the rise, but you don’t have to devote an entire trip to exercise. Instead, why not pair traditional sightseeing with a jog.

Go! Running Tours operates tours in more than 50 destinations worldwide, from Sydney and Bangkok, to Paris and London.

It’s sightseeing with a side of endorphins. No boring, indoor gym required.

The ‘tree hugger’ term may have been a negative in the past, but it turns out that the hippies of old were onto something.

‘Shinrin-yoku’ (or ‘forest bathing’) is the ancient Japanese practice of washing away life’s stresses in a forest environment. Part of the Japanese government’s national health program since the 1980s, it has been shown to aid the immune system, reduce blood pressure and improve sleep. And, given that 67% of the country is forested, Japan is the perfect place to do it.

At HOSHINOYA Karuizawa – just an hour away from Tokyo by bullet train – travelling tree huggers can take advantage of the resort’s idyllic location admits mountains, rivers and forests, through their specially designed Forest Wellness Stay package.

Though Elizabeth Gilbert undoubtedly helped put the jungle-covered mountain town of Ubud on the radar, Ubud’s status as a hippy haven has been longheld.

A centuries-old healing centre for Balinese people, you can soak in some of the soulful energy at the plush Four Seasons Sayan, which embodies the tranquility for which Ubud is renowned.

Positioned within a jungle gorge the resort is actually where Julia Roberts stayed while on location filming the Eat, Pray, Love blockbuster. And the wellbeing component here covers the Sacred River Spa, in-house yoga bale (the anti-gravity yoga in particular is very popular) and meditations and life talks from resident ‘wellness mentor’ (and former Buddhist nun) Ibu Fera. The wellbeing guru leads meditation classes daily, as well as hosting talks on developing love and compassion and discovering that elusive state of being: happiness.

Blessed with pretty beaches and great surf, eight UNESCO World Heritage Sites and one of the highest rates of biodiversity in the world; it’s little wonder that Sri Lanka was named by Lonely Planet as its number one destination in 2019. And for fit-cation fans, the island nation has another big drawcard: epic surf.

Detox is at the heart of this resort (Picture: Supplied)

Welcome in 2023 with a full body detox at one of Thailand’s top resorts, Rosewood Phuket.

The slick five-star hotel offers a tailor-made journey through their comprehensive ‘Fall into Wellness’ program. Run through the Asaya program, guests will receive a curated journey of classes and restorative treatments based on health consultations.

Throw into the mix a 24/7 state-of-the-art fitness centre, daily yoga, pilates and boxing classes, and you have a surefire recipe to banish any silly season overindulgence.

Mornings start with breathing exercises, followed by a range of yoga, while afternoons are all about exploring the stunning bushland and experiencing the Spa Sanctuary — AKA, the largest spa in the entire Southern Hemisphere.

Here, you can indulge in a tome of spa ritual options, in addition to taking advantage of the complex’s meditation suites. Also, given that Hugh Jackman is a former-part owner and now regular visitor, there’s even a chance you might end up sharing pool space with the Wolverine star himself.

The ‘tinkling’ of bells, the deep humming of a Tibetan singing bowl, and the melodic sound of chanting – while sound bathing is currently very ‘on-trend’, it’s certainly not new. From the ancient Greeks to the Egyptians, sound therapy has been used as a form of healing in virtually every culture since time immemorial.

Based on the principle that certain tones and vibrations help to cultivate more vitality, health and creativity, sound bathing is increasingly becoming a fixture on spa menus worldwide.

You can try it yourself at a Sound Healing Academy course, which offers immersive sound bathing experiences in locations all across the world.

If you’re a city slicker with a penchant for swoon-worthy spas, then head to Hanoi to check into the Sofitel Hanoi Metropole’s Le Spa du Metropole.

A prominent fixture in the Vietnamese town since 1901 (back when it opened as the first official luxury residence and hotel in the city during the French colonial period) the hotel has since made waves thanks to its award-winning spa.

Easily one of the best in the entire country, the sprawling complex overlooks a garden courtyard and pool and includes suites for couples and individuals, mani-pedi booths, and steam baths.

I went to Finland to see if getting really, really sweaty in saunas could give me ‘sisu’

Thalassotherapy – the practise of using seawater as a healing tool – has been used as a cure all since ancient times. And the ultimate place to indulge in this therapy is at Bali’s luxury AYANA hotel.

The five-star property boasts the world’s largest aquatic seawater therapy pool — that’s 700 million litres of mineral-rich water directly supplied from the underlying Indian Ocean, which is utilised via 12 hydromassage stations to relieve stress and for relaxation.

The slick resort has just launched three new wellness packages just in time for the new year. Each will focus on different wellness goals and will offer guests the ability to customise activity schedules and treatments with the help of resident professionals, ensuring that healthy habits are cultivated and both the body and mind are nurtured.


MORE : Man travels world with adventurous cat – and wants other pet owners to do the same

Try out one of these holidays with health at their core…