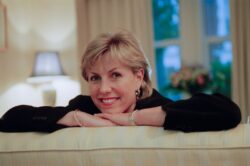 The former Crimewatch co-host was killed on the doorstep of her home in south-west London in a horrendous crime which remains unsolved, nearly 24 years later.

Dando, who was 37 years old when she died in April 1999, was shot once in the head, and her body was discovered 14 minutes later by a neighbour.

She is thought to have died instantly, having been taken to a nearby hospital but declared dead on arrival.

Her neighbour, who didn’t hear a gunshot, later said he witnessed a man walking away from Dando’s house after the incident – which is believed to be the only sighting of her killer.

While her murder still remains a mystery, plenty of conspiracy theories about what happened have been shared.

The Netflix documentary is said to be in the works (Picture: BBC ONE)

And now, a Netflix documentary is in the works to shed new light on the murder.

A release for the documentary states: ‘Netflix is in production on a documentary series about the life and tragic death of one of Britain’s most famous and beloved television presenters, Jill Dando.

‘On the morning of 26th April1999, Jill Dando was killed outside her home in West London. Her murder became one of the most high profile and complex investigations in British history.

Dando was a presenter of Crimewatch (Picture: PA)

‘The multi-part series will blend archive, new research and revelatory interviews, to revisit Dando’s life, career, legacy and what would become one of the most notorious unsolved murders of the 20th century.’

In 2001, Barry George was convicted after being arrested on suspicion of murder of Dando.

What’s next for Happy Valley’s Tommy Lee Royce after busting out of courtroom?

He was given a life sentence at the time but was then acquitted and released after a retrial in 2008.

No-one else has ever been arrested or charged in connection with the crime and to this day the case remains unsolved, with Dando’s family having said they doubt her killer will ever be found.


MORE : Pamela Anderson gets choked up over breakdown of Tommy Lee relationship in Netflix documentary: ‘I don’t think I’ve loved anybody else’


MORE : Cobra Kai to bring Karate Kid spin-off series to a close by ending with season 6 on Netflix

Jill was murdered on her doorstep in 1999, in what went on to be a notorious unsolved murder case.