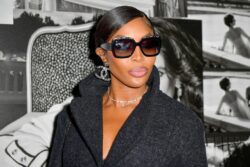 Perhaps no one was more excited by Rishi Sunak becoming the new Prime Minister than Naomi Campbell, who cheered and celebrated on social media much to the surprise of her followers.

It’s a historic moment for Mr Sunak, who has pledged to ‘fix the mistakes’ made by Ms Truss and her cabinet after essentially crashing the economy, and the country as he becomes the first British-Asian Prime Minister in British history and the youngest for some 200 years at the age of 42.

In an Instagram post that has since been deleted, the fashion icon, 52, wrote: ‘Yeah!!! #Rishi Sunak @rishisunakmp our #UK minister!! Now this is right!! He has all the qualifications to do this… I hope you will be a prime minister for all us all the people. Historical day in United Kingdom. A Diwali we will never forget. #happydiwali #diversity #inclusion [sic].’

The post included a photo of the new PM with ‘Happy Diwali. Love from, the Prime Minister’ written around it.

Mr Sunak addressed the nation for the first time as Prime Minister outside Downing Street on Tuesday (Picture: Reuters)

Campbell added in her Instagram stories alongside a photo of Mr Sunak: ‘YESS!! THIS IS RIGHT!!’

Fans were surprised by her endorsement of the new Prime Minister, with one tweeting: ‘Logging onto insta, I was not expecting to see THE naomi campbell posting rishi sunak like this.’

Campbell was enthusiastic in her support of the new PM on social media (Picture: @naomi, Instagram)

Another revealed: ‘Rishi is pm and i found out about from naomi campbells instagram post absolutely gassed about it.’

‘I shouldn’t have laughed but naomi endorsing rishi for pm has made me p**s,’ one chimed in.

Campbell’s post took fans aback as she hasn’t been notably vocal about the Government chaos in recent months, which also included the departure of Boris Johnson as Prime Minister in August.

Metro.co.uk has reached out to Naomi Campbell’s reps for comment.

They never expected it.