Myleene Klass wows in red bikini as she spends Christmas in the Maldives: ‘Sea-sons greeting’ 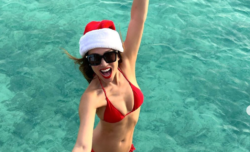 It looks like Mylene is making the most of her festive getaway (Picture:@myleneklass/Instagram)

Myleene Klass is spreading some serious festive cheer all the way from the Maldives.

The 44-year-old TV personality soaked up the sun during her Christmas getaway with her fiancé Simon Motson, their son Apollo, 3, and Myleene’s daughters – who she shares with ex-husband Graham Quinn – Ava, 15 and Hero, 11.

The former I’m A Celebrity star shared a string of snaps on Instagram, one of which included the family rocking Santa hats while on the beach.

In one of the shots, the mother-of-three was seen cradling her youngest son Apollo and smiling from ear to ear.

TV presenter Kate Thornton added: ‘Merry Christmas to all of you from all of us.’

The former Hear’Say singer turned plenty of heads during her stint on I’m A Celebrity back in 2006, coming close to taking the crown after coming second behind Matt Willis.

Talking with Metro.co.uk in July, she teased her return to the jungle by simply stating: ‘Put it this way, I haven’t packed away my white bikini quite yet. It hasn’t gone up into the loft yet!

‘I think the show itself is just incredible. I know people think of it in different ways but for me, I think it’s in the face of adversity, it’s the way people get to know what they’re made of, test their mettle, and just face their fear.’

In 2020, when the show aired from a castle in Wales due to Covid, Myleene reflected on her time in camp and how that white bikini came to be in her possession.

‘I remember one of the show producers looking at my bikinis in the hotel before I went to camp,’ she began on social media.

‘One was covered in stripes, “We’ll have to stop at the shops as that’s probably going to strobe on camera”. I ran into the shop en route to the jungle, asked the shop assistant for the plainest bikini she had.

‘Best $40 I ever spent… especially as it raised so much for charity afterwards,’ said the mum-of-three.


MORE : Ultimate TV Quiz of 2022? From Stranger Things to Love Island – can you remember all the golden moments?