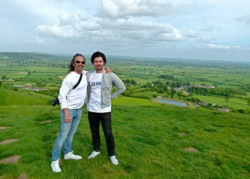 I was told that Barron, 27, had been missing for over seven hours. His phone had been left at his flat after he jumped in his car for an urgent work errand and nobody could contact him.

Immediately I knew something was wrong. My son wouldn’t disappear like this.

I tried to find out where Barron was and began frantically calling everyone that would maybe know his whereabouts; if anyone had seen him and where he was the night before.

A friend told me that he saw footage of my car on the news. Barron had been using it while he was staying in my flat in Miami; I was in New York for work.

The news reported footage of a white SUV, just like mine, that had crashed and was on fire by Miami airport.

Shortly after seeing the report, the police contacted me to inform me that there had been a car accident. I was being asked questions by them, such as who my son’s dentist was in order to obtain records of his teeth.

The period after his death changed me instantly (Picture: Steven Machat)

I felt sick to the stomach and knew something was amiss; moreover, I had no choice but to keep my composure, deep down knowing I could not fix it

Later that morning, I was told that one passenger had died and the other survived, but the police wouldn’t tell me who it was that was dead.

It was later revealed that Barron’s friend had managed to escape the wreckage of the car, while Barron was trapped as the engine set on fire. I was devastated.

I started to build a picture of the events that led to my son’s death, hearing from his band members who were living with Barron at my flat, that he’d previously crashed his car into a pole after taking too many Xanax tablets and falling asleep at the wheel.

The period after his death changed me instantly. I took control of what I could do.

It was my responsibility to inform my ex-wife and our 32-year-old daughter that Barron was gone, which was the worst phone call I’ve ever had to make.

They were inconsolable, but I could not allow myself to grieve. I felt I had a bigger role to fulfil by being there for everyone else feeling Barron’s loss.

A week before his passing Barron and I had taken a photo together at the Miami Heat game – a photo that I loved (Picture: Steven Machat)

Losing a loved one is an isolating experience. After Barron’s death, many of the people in my life including my closest friends and family no longer knew how to talk to me openly – or tiptoed around asking questions about him.

Most people are so scared of death and so uncomfortable with the concept of loss that they can’t even bear to talk about it. Even my own family didn’t want to speak about it, which was incredibly lonely.

A week before his passing Barron and I had taken a photo together at the Miami Heat game – a photo that I loved. Barron never liked me posting photos of him on social media and he made me promise not to put it up.

After his death, I felt that he had broken a promise to me by leaving me, so I broke my promise to him and posted the last picture we had together in his memory on Facebook. I felt his presence and it was comforting. It was after this that Debbie got in touch.

I met Debbie in 1964 at junior high school that fate had us attend together. I had always thought she was cute and a force of energy but we never really spoke.

Seeing the picture, Debbie reached out offering her support as her son Jesse had passed in 2003 from complications due to muscular dystrophy.

I take his memory to every sports game with me – he is always there with me (Picture: Steven Machat)

Debbie understood the process of grieving a child and messaged me, telling me that she was always there to talk, if I needed to.

We began messaging regularly and connected instantly. After a year, we met for lunch. There was something special about this meeting where we spoke in person for the first time. It was like spending time with someone I’d known forever.

I knew there was something between us, but I wasn’t ready for more. I was finishing what I needed to do in my own personal journey, writing and travelling the globe. I never stopped thinking about Debbie, though, and what could have been. Although we remained connected on Facebook, we lost touch.

A few years later, on February 14 2020, I saw one of her Facebook posts and suddenly heard my son’s voice in my head, exclaiming: ‘Dad, if you don’t call her now you’re gonna lose her forever.’

So, I called her, and told her I’d been thinking about her for some time. I could tell Debbie was startled, wondering what I wanted. We met two days later.

We shared the same views on what was important in life, not just prioritising money and material things. We began seeing each other more, and one day became the next before we shared our first kiss. A kiss where time stood still.

We dated around the pandemic and two months later decided to quarantine together. Earlier this year we got married. We have never been apart except for a few business trips.

Both our boys loved life. Jesse suffered in his physical body daily, but never lost the appreciation for the life Debbie gave him. He reminded her of that every day.

We celebrate our boys every day, too. There is no greater honour to give to them than the smiles on our faces as we remember them each day.

Earlier this year we got married. We have never been apart except for a few business trips (Picture: Steven Machat)

My son and I shared a love for music and live team sports, and I celebrate him each time I attend an event that I know he would have loved. I take his memory to every sports game with me – he is always there with me.

We honour Jesse and Barron’s memory in the best way that we can by enjoying life, living it to the fullest, and being grateful for each day.

Some days are more difficult than others when you have lost a loved one, though. Holidays in particular can be tough. Father’s Day especially reminds me that both my own father and my son were taken from me too soon.

Despite this, letting go is not something that I have ever struggled with, and it’s given me strength in coping with my son’s death.

I believe that you need to live your life the best you can, with whatever cards you are dealt. The best way to deal with this is trying to live in the present, not dwelling on the past or worrying about the future.

Finding Debbie in the autumn of our years and sharing the same experience and understanding of grief, has helped me to live in the moment and let go of the pain of the past.

The impact that my son had on my life will be with me forever, as will his love and the light he brought to me.

I still communicate with Barron, and can call upon him for a smile and the ray of love to feel his energy around me. After he died, his energy of eternal love filled the hole in my heart that the passing of his physical body left behind.

In a way, I don’t believe that my son died in 2015. Yes, his physical body left us, but his energy and love remained – and still exists even now.

Steven Machat is an entertainment mogul and author. He has worked with the likes of Genesis, Phil Collins, and Leonard Cohen. His latest book, We’ve Got To Get Out Of This Place explores the smoke and mirrors that surrounds humanity, religion and philosophy. For more information visit www.stevenmachat.com.


MORE : When my 18-year-old son died, noone let me talk about him


MORE : Nothing could have prepared me for my son’s death – but I made sure he lived life to the full


MORE : ‘The grief will never go – but talking about it makes you realise you’re not alone’

In this exciting new series from Metro.co.uk, What It Feels Like… not only shares one person’s moving story, but also the details and emotions entwined within it, to allow readers a true insight into their life changing experience.

Both Debbie and I had lost our sons in their 20s.