My sister, mum and husband were all killed in the space of 2 years – after all the trauma I fled to the UK 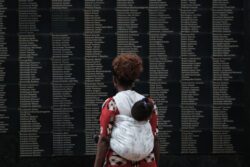 The moment I saw the news that the High Court ruled the Government’s Rwanda deportation plan as ‘lawful’, my heart sank.

How could they give the Home Office the green light to do this to asylum seekers who have come to the UK in search of safety?

As someone who fled the Rwandan genocide almost 30 years ago, I was sickened that a court sided with the Government. Unfortunately, I know all too well about the injustices of the African nation I once called home.

I grew up in a village called Nyaruhengeri in Rwanda.

My father was from the Tutsi ethnic group, and my mother came from a family that was mostly Hutu. As I grew older, tensions between the two ethnic groups began to rise, but life went on.

While working at Oxfam, I met my English husband – who was a colleague at the time – and we got married in 1993 in Rwanda, before briefly living in Kigali. Among our 200 guests were both Hutus and Tutsis.

At the end of March in 1994, I went back to my village for my sister’s child’s baptism. My husband didn’t come with me because he was on a contract with Oxfam in Angola at the time.

I was actually planning to return to Kigali on 7 April, but when I woke up, my brother said: ‘Something happened on the radio. They say no one should travel, but stay where they are.’ The rebels had shot down the Hutu President’s plane.

After that moment, things escalated very quickly. The new president went on the radio and badmouthed Tutsis. Next, the government started telling village leaders they were allowed to kill Tutsis.

Our village mayor stood up against this, but a high-ranking Hutu leader gathered the young people and told them to kill everyone Tutsi they could find. On 21 April – around 7pm – we heard a mob going into Tutsi houses killing and smashing up their properties.

My brother urged us to run away, so we left our house and went into the bush. My mother went with my sister, and I went with my brother – we decided to separate to avoid being killed altogether and we were hoping that perhaps some of us would survive.

There were barriers everywhere – a journey that should have taken half an hour, took five hours. We spent two weeks in the bush, walking at night and hiding during the day.

I ended up making my way to my aunt’s house in the nearby city of Butare. When I got there, she helped hide me, but militias were routinely raiding houses and it wasn’t safe for me to stay after a while.

For months, I was on the run – remarkably escaping death on numerous occasions, including having a gun to my head. To this day, I thank God I somehow resisted that fate.

Rwanda smelled of death. There were dogs eating dead bodies – Tutsis and even Hutus.

Fortuitously, I ended up running into a friend of mine from Kigali, who eventually helped me get in contact with invaluable aid agencies. With their help, I managed to get to the border between Rwanda and Burundi to send a message to my husband that I was still alive and in a college in Butare.

A few days later on 25 June 1994, my husband – along with other people from Oxfam – came to take me out of the country. I was so relieved to see him, but I wasn’t out of danger yet. Even as we drove over the border, the militias were trying to force me out of the car.

My husband ended up telling me that as soon as he heard about the genocide, he tried to enter Rwanda to rescue me but he wasn’t allowed. If it wasn’t for the aid agencies I managed to get in contact with, I probably wouldn’t be alive today.

After the genocide was over in July, I went back to Rwanda with my husband through Oxfam because they asked him to look for missing staff from the area.

He helped me travel to my village to see if there was someone from my family who survived. That’s when people there who had been captured but survived told me that my mother and sister had both been killed by Tutsi forces – including giving me the name of the man who killed them.

I was devastated. My brother survived and decided to stay in Rwanda, but he lived a difficult life. He died in 2015.

I was welcomed here and cared for by my husband’s family (Picture: Prudentienne Seward)

After our trip back to Rwanda, I moved with my husband to Benguela in Angola because he was appointed as a Country Deputy for Oxfam. That’s where we had my son and tried to build a new life.

On 1 April 1996, my husband went on a work trip to another part of Angola. Unfortunately, his car was ambushed by bandits, who shot him and everyone he was with, then took all their belongings.

I was alerted to this news two days later and I immediately went into a state of shock. I thought that I had no life left after losing my family in Rwanda and then my husband, who I loved very much.

My husband’s family immediately invited me to live with them in England, and so, that was how – with an 11-month-year-old baby in my arms – I arrived in Kent just days later on 6 April.

In the years since, the Rwandan government changed, and the embassy reached out to me as a survivor of the genocide. But when I mentioned my mother and sister were killed by Tutsi forces, and the man responsible continued to live freely in Rwanda, the tone changed.

I have been threatened by numerous Rwandan officials and their supporters in the years since – simply for speaking out about my family’s experience. Today, I talk about my story online and still get threats.

Having experienced what happens when you stand up against the Rwandan government, I know that if the UK sends asylum seekers to Rwanda, their chances of speaking out about conditions there would be zero.

In 1994, I was a refugee (Picture: SIMON WOHLFAHRT/AFP via Getty Images)

In 2018, Congolese refugees in the Kiziba camp in Rwanda protested not having enough food. Some were shot dead by Rwandan police.

Any asylum seekers sent from Britain could also vanish or be killed.

The hotel that the Rwandan government is supposed to be putting them in is not a hotel. It is a hostel funded privately by members of the Rwandan diaspora to shelter survivors of the genocide.

In 1994, I was a refugee. I lost everything. I had nothing. I was running. When I was rescued, it was from a refugee camp.

But despite what has happened to me, I feel lucky. I was welcomed here and cared for by my husband’s family. I have British friends. My son thrived at school and went on to Oxford University.

Many of today’s refugees are people who had a good life, but had to run away from death, from being criminalised, or because they spoke out.

Imagine someone comes seeking safety, and you send them to a hell like Rwanda instead (Picture: Prudentienne Seward)

When I think back to the moment I was almost killed, I think it is because God saved me. He saved me so I can tell the truth of what happened. That is my mission.

When I sit down and think of all the times someone tried to kill me, I believe God is telling me: ‘Don’t be quiet’.

After the High Court’s latest decision, I believe that refugees who are here now should be allowed to stay. If this is not possible, the UK government should make deals with allied countries such as Canada or the US – that uphold democratic and human rights values – to send them there, not Rwanda.

Three Russians killed after second attack on airbase in one month

Man fights off suspected thieves in his underwear on Boxing Day

Death of boy, 4, at Center Parcs swimming pool not treated as ‘suspicious’

Imagine someone comes seeking safety, and you send them to a hell like Rwanda instead.

Britain is a beautiful country with fantastic values. It’s sad to see politicians dealing so dirty and creating such inequality.

I think it is the people who stand up to these hateful policies, they are the ones with the real values and the good hearts.

Immigration Nation is a series that aims to destigmatise the word ‘immigrant’ and explore the powerful first-person stories of people who’ve arrived in the UK – and called it home. If you have a story you’d like to share, email [email protected]


MORE : Asylum seekers like me can’t get student loans for university


MORE : My parents were killed during the Holocaust – I never got a chance to say goodbye

My mum and sister were killed during the Rwandan genocide – I now can’t understand why the Government wants to send asylum seekers there.