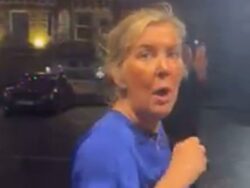 A woman who was filmed racially abusing a doorman outside a cocktail bar in Halifax has been handed a police caution and sacked from her job.

Mum-of-two Justine Morrison, 51, spent the weekend in police cells after a video of her racist tirade was posted online.

In January the former part-time accountant and a man believed to be her husband, were kicked out of a cocktail bar in Halifax, West Yorkshire after upsetting the other customers.

In the video, she can be seen clapping her hands together in mock applause as she is ejected from the venue, and saying: ‘Oh my god you must be so proud. You’re working on a door.’

But as they turn to leave, she turns to point her finger at the doorman and says: ‘You black man.’

As she walks away, she spits the word ‘Black’ at the doorman once again, before adding: ‘That’s why you get a name. Black.’

Justine Morrison was caught on camera racially abusing a bouncer after he ejected her from a cocktail bar (Picture: Ben Lack)

Ms Morrison has since admitted the offences and accepted a conditional caution, which involves taking part in a restorative justice programme and accepting responsibility for her actions.

The owner of Vine Bar, where the incident occurred, later confirmed she has been permanently banned from the venue.

A statement released by the bar read: ‘All the staff and management at Vine are truly appalled at the behaviour of the customer who racially abused our doorman last Friday evening.

‘This kind of behaviour towards our staff will not be tolerated and we are thankful that West Yorkshire Police took swift and decisive action.

‘Abuse of hospitality staff is unfortunately a problem that needs stamping out. No one should have to go to work and endure abuse; it’s just not acceptable.’

The video gained traction after it was posted on Facebook by a user named Dally Whylie, who said: ‘Love the first week [back] on the door after Xmas.

‘Please can I make it quite clear that the dance class Shine [is] no longer employing this woman and it should not affect the dance school in any way at all.’

The part-time accountant has since been sacked from her job at a local theatre company (Picture: Twitter)

Commenting on the video, one woman said: ‘I was there and her pal was constantly whistling so loud it hurt your ears.

‘The doorman asked her politely about five times to stop, otherwise they would ask her to leave. Unfortunately, she was above being told what to do and continued.

‘She was escorted out with no violence. Then she came out with the barrage of racist insults. Hope her kids are proud of her.’

According to posts on social media, Ms Morrison was a former employee at a bank who now works part-time as an accountant for a local theatre group.

But following the incident, the Shine Theatre Arts company issued a statement on social media claiming she only worked on their accounts for a couple of hours a week.

A spokesperson for Shine said: ‘I have just been made aware of this terrible video and I am absolutely shocked and disgusted. It has really shaken me as it is so hard to watch.

‘It Is absolutely disgusting. I just want to clarify that the woman in the video only does a couple of hours of admin for me and is not an employee of Shine.

‘I will definitely be dealing with it. I have asked her to take Shine off her profile as we will no longer be using her.

‘Shine is a small inclusive dance school and I can’t apologise enough that we have been associated with this behaviour.’

West Yorkshire Police said: ‘A 51-year-old woman was arrested and interviewed in relation to an incident of causing racially aggravated harassment, alarm or distress which took place at Vine Bar, in Stainland Road, West Vale, Halifax on Friday 6 January.

‘She admitted the offences and received a conditional caution, as a criminal justice outcome with conditions.

‘This includes taking part in the restorative justice programme and accepting responsibility for her actions.’

Justine Morrison, 51, has lost her job after being caught racially abusing a doorman outside a cocktail bar in Halifax.