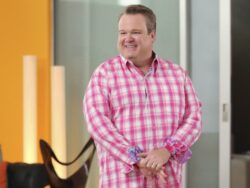 Modern Family star Eric Stonestreet has addressed an X-Rated moment that some viewers might have missed.

The sitcom ran for 11 seasons and focused on the day-to-day shenanigans of the Pritchetts and the Dunphys as we got a glimpse into their intertwining lives.

The series left our screens two years ago, but that hasn’t stopped us all from rewatching every episode on a loop, picking up on minor details that have made the show even funnier.

Earlier this week, one eagle-eyed Twitter fan spotted an explicit moment with Cam Tucker (Eric) in the classroom in season three, and couldn’t help but share his findings.

Taking to his profile, the user in question shared a snap of the character standing in front of a white board while teaching a music lesson at school.

In the snap, he was positioned so that only a musical note and the end of his surname, which happened to spell out a very rude word.

We never saw this on our binge watches… (Picture: ABC)

‘@ericstonestreet I have to ask, and I hope you see this..,’ the viewer penned.

‘How intentional was the placement of your head in relation to the writing on the board?’

@ericstonestreet I have to ask, and I hope you see this.. how intentional was the placement of your head in relation to the writing on the board? pic.twitter.com/APBPJlzcax

Eric simply replied with a gif of himself as Cam, pulling a very knowing look.

Which basically says it all…

Jesse Tyler Ferguson reveals that we could have seen a Modern Family spin-off (Picture: ABC)

Cam and on-screen husband Mitchell (Jesse Tyler Ferguson) were firm favorites throughout the run of the program, which ended with the couple and their family swapping California for Missouri.

However, it turns out that there was a possible spin-off in the works, focusing on their time on the farm.

During an appearance on Watch What Happens Live!, Jesse spilled on the sequel series, telling host Andy Cohen: ‘There were discussions. I think the network decided against it.

‘That’s the first time I ever said that!

‘I think they were just wondering if this was the right family to still tell that story.

‘We’d been on for 11 years, I think they were ready to move in a different direction.’

We need to make this happen.

Did you spot this?