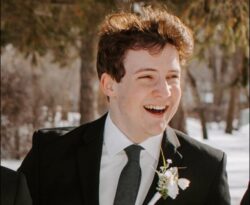 George Musser’s body was found on the evening of Christmas Day (Picture: Facebook)

A college student who went missing after leaving a bar on frigid Christmas Eve has been found dead.

George Musser, 20, was at Brian’s Bar in downtown Stillwater, Minnesota, until early Saturday. His body was discovered in Bayside Township around 7pm on Christmas Day.

‘I am heartbroken to share that the police have found his body,’ Musser’s cousin Emily Dalbec wrote on a Facebook group that was aimed at finding him. ‘We are trusting in The Lord during this horrific time that He has guided George into Heaven.’

A GoFundMe page for Musser’s funeral expenses states that ‘this was not the outcome we were praying for’.

‘We know George has entered heaven and God and all of his family in heaven will take care of him until we can see him again,’ wrote Heidi Kram, whose cousin is a parent of the victim.

Musser’s wallet and keys were recovered near the bar and his car remained in the parking lot. The college student wore a gray flannel, jeans and a black beanie, but did not wear a jacket.

Ally McKay, who was one of the least to see Musser, said he went to the booth and was sitting and talking with friends around 1.30am.

‘And he told us he had to go to the bathroom and then he never returned,’ McKay told CBS Minneapolis.

‘We looked for him at bar close, but Brian’s was persistent that everyone get out, so we left and we had to assume that he had found his way home.’

By Sunday afternoon, police targeted their search in a small area.

‘We haven’t had very much luck with some of the electronic surveillance stuff we’ve been looking at, whether it’s cameras, cell phone, stuff like that, so it’s a very difficult situation,’ Police Chief Brian Mueller said at the time.

Dalbec said the family was ‘preparing for the worst but hoping for the best’, which was the reason they asked for the community’s help in the search.

The GoFundMe fundraiser had garnered more than $38,000 in donations as of late afternoon Monday.

George Musser, 20, was last seen at a bar in downtown Stillwater, Minnesota.