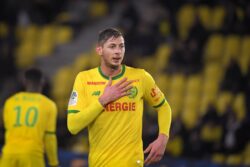 Two men have been jailed after chaos erupted during a Cardiff City vs Millwall match.

Stewards were attacked and pushed in the bedlam, with one staff member punched 11 times.

Violence, which took place in the Millwall end of the Cardiff City Stadium, also saw one fan ‘make aeroplane gestures’ and ‘chant about the death of Emiliano Sala’.

The Argentine-born striker, 28, died in 2019 when a plane he was a passenger on crashed in the English Channel close to Guernsey.

Pilot David Ibbotson, 59, was also killed. His body has never been found.

Sala had been joining Cardiff City in a £15 million transfer from French Ligue 1 side Nantes, which involved football agent Willie McKay.

He and his father, Kevin, then began arguing with the stewards, with the older man punching one staff member 11 times.

A number of away supporters rushed over, and stewards were pushed to the ground – some falling down steep stairs and over rows of seats.

Kevin Ellis, 60, has been sentenced to 12 months for his actions at the match. Meanwhile his son Kane Ellis, 20, was sentenced to nine months in a young offenders’ institution.

Both men from Catford, London, admitted a charge of affray and are banned from attending football matches for eight years and six years retrospectively.

They are also banned from attended football matches for four years and must carry out 180 hours of unpaid work.

Detective Inspector Michael Greaves, from South Wales Police, said: ‘South Wales Police will not tolerate any kind of violence or abuse towards stewards who are essentially public servants, working hard to keep the Cardiff City Stadium a safe place for all.

‘The overwhelming majority of visiting fans to the Cardiff City Stadium are well-behaved and passionate about their club and no doubt both home and away fans were left shocked by this incident.

‘Whenever there is evidence of football-related disorder or violence we always pursue those responsible in order that appropriate action is taken.’

Two men have been jailed after chaos erupted during a Cardiff City vs Millwall match.