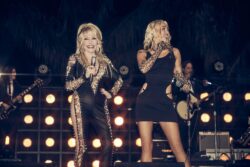 What better way to ring in the new year than with Miley Cyrus and Dolly Parton? (Picture: NBC)

We are completely not worthy of Miley Cyrus and Dolly Parton, who not only shared the stage to perform their most iconic hits, but also invited the most incredible surprise guests.

Pop rebel Miley, 30, and country music legend Dolly, 76, did the honours of bringing their American fans into 2023 at the second annual Miley’s New Year’s Eve party which aired on NBC.

It saw the two musicians – who are godmother and goddaughter – duet on Dolly’s classic I Will Always Love You, which was famously covered and propelled to popularity by Whitney Houston, while also singing Miley’s pop hit Wrecking Ball together.

The fun didn’t stop there as Miley had another surprise in store for fans, inviting the one and only Paris Hilton on-stage to deliver a rare performance of her iconic 2006 single Stars Are Blind. As if that wasn’t enough, the pair were joined by Australian singer Sia.

Paris, who dazzled and looked every inch the pop star she could have been in a sparkling pink minidress, shared a clip from the performance on Instagram and said: ‘I told you I had another surprise! 😉

‘I had so much fun singing #StarsAreBlind on @MileyCyrus’ New Years Eve Special with Miley & @SiaMusic! 🥳 The perfect way to ring in 2023 and celebrate my new version of this iconic song. 🎶🎤👸🏼💖.’

Miley shared the stage with her godmother Dolly for an iconic show (Picture: NBC)

The two performed a medley of hits including I Will Always Love You (Picture: NBC)

Miley was certainly the belle of the ball (Picture: NBC)

Paris Hilton gave us all nostalgia with her performance of her iconic song Stars Are Blind (Picture: NBC)

Sia joined Miley and Paris for the duet (Picture: NBC)

Can we talk about Miley’s stage outfits, because they were something (Picture: NBC)

She then teased: ‘I can’t wait to show you all the other exciting things I’m working on. This is only the beginning! Happy new year!’

Paris, 41, famously took a stab at a music career by releasing the tropical-tinged banger Stars Are Blind in 2006, and it’s become something of a pop culture legend.

Another added: ‘Can we talk about how ICONIC was the performance of #StarsAreBlind with Miley & Sia?? OMG I really wanted to be there..lucky people who had this opportunity. @ParisHilton you know you’ll be ALWAYS an icon. Forever sliving.’

Which of Miley’s duets were you loving the most? Comment Now

One other fan joined in: ‘YOU’RE TELLING ME MILEY CYRUS SANG STARS ARE BLIND WITH PARIS HILTON, PARTY IN THE USA, AND THEN DID A WHOLE MINI CONCERT WITH *DOLLY PARTON*?! Queen of NYE. Iconic.’

Another joked: ‘Me when @ParisHilton came out singing like she’s a 5x Grammy award winner… there’s literally no one like the OG queenParis.’

The show also featured a skit starring the Party In The USA hitmaker, with Miley and Dolly recruiting Saturday Night Live’s Sarah Sherman and Chloe Fineman as understudies in case they were needed.

It’s the second year Miley has hosted the event, with Pete Davidson taking up the position as her sidekick in 2021. Who will she choose next year and will they be as great as Dolly?

What a way to ring in the new year!