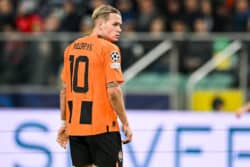 Mykhailo Mudryk is wanted by both Arsenal and Chelsea (Picture: Getty)

Arsenal’s hopes of signing Mikhailo Mudryk in the January transfer window are in the balance with the Shakhtar Donetsk star now ‘torn’ over a move to Premier League rivals Chelsea.

The Gunners had identified the 22-year-old winger as their No.1 target to strengthen their attack and help sustain their unlikely title challenge.

Arsenal have already seen two bids for the Ukraine international turned down with Shakhtar valuing their prize asset at £88million, guided by the fees Aston Villa and Ajax received for Jack Grealish and Antony.

Mudryk has made no secret of his desire to join the current league leaders and although Arsenal remain in talks with Shakhtar, Chelsea have made an appealing pitch to the player.

Chelsea are currently languishing in tenth place following Thursday’s defeat against Manchester City and are in the midst of an injury crisis with 10 first team players unavailable to manager Graham Potter.

Despite their current malaise, Chelsea are committed to the former Brighton manager who they view as the ideal candidate to oversee a seismic rebuild, based around some of the most exciting young players in world football.

Without doubts surrounding the long-term futures of Christian Pulisic, Hakim Ziyech and Kai Havertz, Mudryk would form a key piece in Potter’s jigsaw and is giving serious consideration to joining the project, according to The Sun.

whereas he would have to fight for a place at Arsenal amid significant competition from the likes of Bukayo Saka, Gabriel Martinelli and Emile Smith Rowe.

Chelsea have already promised to trump any bid Arsenal make and Shakhtar’s sporting director Darijo Srna and CEO Serhii Palkin have been holding talks, with the former having attended the midweek game against City.

Arsenal had hoped to conclude the signing of Mudryk early in the window but the deal now looks almost certain to go to the wire with the player’s agent confirming on Friday that his client had flown to Turkey to take part in Shakhtar’s training camp.

‘Mudryk is a Shakhtar player and the decision on his transfer will be made by the management of the Donetsk club,’ Alyokhin told Sport Arena.

‘Mykhailo is now preparing to go with Shakhtar to the training camp. Trust only official information.’

The Blues have made their pitch to the highly-rated winger.