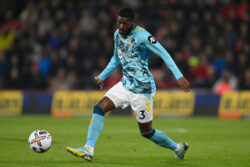 Ainsley Maitland-Niles moved on loan to Southampton in the summer (Picture: Getty Images)

Ainsley Maitland-Niles is struggling to make an impact during his loan spell at Southampton from Arsenal and Mikel Arteta says he must focus on getting into the Saints team before worrying about any possible future at the Emirates.

Maintland-Niles won five England caps in 2020, but then fell out of favour at Arsenal under Arteta and has spent time on loan at West Brom and Roma.

The versatile midfielder and full-back is now with Southampton for the season but is not getting much game time under Ralph Hasenhuttl, making just three Premier League appearances, one of which as a substitute.

Arsenal and Southampton meet in the Premier League on Sunday and Maitland-Niles will not be able to play due to his loan arrangement, but Arteta would like to see him on the pitch more often.

If things continue as they are for the 25-year-old then he seems very unlikely to have any future at Arsenal, but Arteta says if he focuses on his game with Southampton then that could change.

‘Obviously he won’t be able to play against us and he hasn’t played that much,’ Arteta said of Maitland-Niles.

‘Hopefully he can get the minutes, he can pick up some momentum as well because we need him to play the games.

Maitland-Niles would love to get back into the Arsenal fold under Arteta (Picture: Getty Images)

‘The future he has right now is his present, the most important thing for him to get his place and start to perform at the level that he can.

‘That’s something now for his manager to answer because he’s not with us. He needs to focus in the present which is the most important thing for his future.’

Maitland-Niles has even been left out of the Southampton squad for some Premier League squads, with the Saints boss explaining last month that he was not up to speed enough to be involved.

‘We have with Ainsley a lot of work to do also because he has to adapt to our game and this is something that takes time a little bit,’ said Hasenhuttl in September.

‘We see also during the week what we ask him to do and especially in the midfield position it takes a little bit to understand how we want to do it.

‘It doesn’t make sense to throw someone in who isn’t ready for what we want to do. When he is ready and on the level we think he has to be then he will help us for sure.’

‘He needs to focus in the present.’