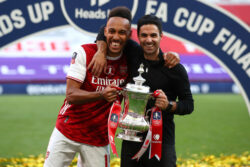 Aubameyang spent just over a year under Arteta at Arsenal and during that time the team won the FA Cup.

But the striker’s final months with the Gunners turned sour as Arteta stripped him of the captaincy following a several disciplinary issues.

Arsenal ended up terminating Aubameyang’s £350,000-a-week contract in February which paved the way for his move to Barcelona.

But Arteta insists Aubameyang was not the only player he felt who was restricting Arsenal’s progression.

When asked about the decision to get rid of Aubameyang, Arteta told Sky Sports: ‘First of all I didn’t take that decision, we took that decision as a club.

‘Obviously there is my recommendation and what I feel that we need to do to get where we want.

‘But I wouldn’t like to single out one player. I think it was with several players.

‘It was part of the strategy of what we’re trying to build.

‘At the end of the day, when you are in that process and you want to go faster there are people holding that boat [back] and putting weight on it.

‘I’m sorry but we want to go even faster and there’s no time, whether it’s a player or a staff member, for someone damaging the club and we made that decision.’

Arteta also claims Arsenal are already ahead of his five-phase plan which he made when he was appointed in December 2019.

‘The important ones are my wife and my family because that’s when you really open up, open your feelings, and say exactly the way you are feeling,’ Arteta said.

‘Then the coaching staff, I think they are critical, you can really sense what is happening, how they are feeling, how they can help you.

‘The third one is to have a club behind you that is understanding what the situation is and what it’s going take to move from where we are here to there.

‘The good thing is I had a really clear plan, I put a plan of five different phases for the club – where we are compared with the rest of the teams.

‘The timeline and everything we have to hit in every phase.’

Asked if Arsenal are ahead of behind his current plan, Arteta smiled and replied: ‘We are ahead.’

‘When you are in that process and you want to go faster there are people holding that boat and putting weight on it.’