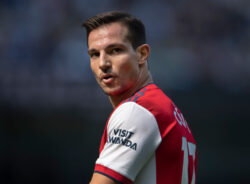 Cedric Soares has been linked with an Arsenal exit in January (Picture: Getty Images)

Mikel Arteta says Arsenal will be very careful about which players they let go during the January transfer window, as Fulham pursue Cedric Soares.

The full-back is struggling for game time with the Gunners, falling further down the pecking order this season under Arteta.

Ben White has been playing at right-back, with Tomehiro Tomiyasu also ahead of Soares in the fight for that position. Soares is versatile and can play on the other side of defence, but Oleksandr Zinchenko and Kieran Tierney are battling it out for the left-back slot.

Fulham are keen to take advantage of the situation and bring the 31-year-old to west London, while Bayer Leverkusen and Villarreal have also been linked with a move for the Portuguese defender.

It seemed that Arsenal were open to letting him go, but Arteta says they will be very careful with any outgoings in January, well aware of the busy schedule ahead and a relatively thin squad compared to their rivals at the top of the Premier League table.

‘We know where we are in terms of the squad and the numbers that we have, so we’re going to be extremely cautious in what we do in this window,’ said the Spaniard.

Arsenal return to Premier League action at home to West Ham on Boxing Day as they look to extend their impressive five point lead at the top of the table.

Manchester City are not playing until 28 December when they travel to Leeds United so Arteta has the chance to open up an eight point gap on their rivals if they can beat the Hammers.


MORE : Arsenal to trigger two-year contract extension for Charlie Patino as he stars on loan

‘We’re going to be extremely cautious.’