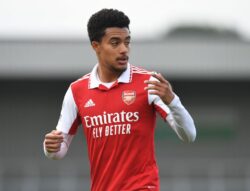 Miguel Azeez is heading out on another loan away from Arsenal (Picture: Getty Images)

The 20-year-old has spent the season so far on loan in Spain with UD Ibiza, but after making 11 appearances for the Segunda Division side he has been recalled from that stint and will join the Latics for the rest of the campaign.

Azeez has made just one first team appearance for the Gunners, coming on for a brief showing in a Europa League contest in 2020, but he has also been on the bench four times in the Premier League.

The midfielder will be thrown into a relegation battle in the Championship with Wigan struggling badly at the foot of the table.

Toure took over at the end of November, his first job as a manager, and is yet to win a game, losing four and drawing two, which has left Wigan bottom of the table.

Azeez said of the move: ‘I’m really happy to be here. It’s a real honour, and I thank both Wigan and Arsenal for getting this deal over the line. I’m looking forward to playing and helping the team.

‘It’s a big step up, and I’m ready to give my all for the team and the fans, and prove myself.’

Adding on working with Toure, he said: Firstly, it was the confidence I had in the manager when he spoke to me. He wanted me to be a part of the team and help them (moving forward).

‘That coming from an Arsenal legend is such an honour, especially with myself being an Arsenal fan. Working with Kolo is going to be an honour.’


MORE : Emile Smith Rowe explains injury has been a problem for years after making Arsenal return

The 20-year-old is out on another loan spell.