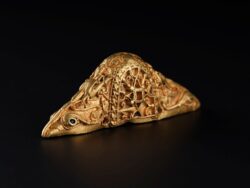 This solid gold sword pommel is believed to date back to 700AD and is worth about £30k (Credits: PA)

An ‘exceptionally rare’ solid-gold sword pommel has been discovered by a metal detectorist.

The artifact dates back to the early medieval period and has come into the ownership of Scotland’s national museums.

The impressive find was located near Blair Drummond, Stirling, and is believed to date back to 700AD. Measuring 5.5cm wide and weighing 25g, the golden knob is valued at an astonishing £30,000.

Dr Alice Blackwell, a senior curator of medieval archaeology and history, said the opulent object, decorated in gold filigree, is like nothing else found in the UK before.

Despite its impressive, decorative detail, she said it remains unclear as to who exactly it belonged to more than a thousand years ago.

‘The pommel is certainly unique,’ Dr Blackwell said. ‘It’s a bit of a cultural, artistic melting pot, so it’s difficult to say where it fits and where it was made.

‘It certainly has a lot of inheritance from Anglo-Saxon art, but it belongs to this period of the most amazing creative fusion where different types of styles and art and techniques for making things were all melted together to make something new.’

The pommel has the head of a bird of prey pointing outwards from each side (Credits: PA)

Dr Blackwood said the pommel fits the ‘insular art’ style, made famous by illuminated manuscripts such as the Lindisfarne Gospels. Closer inspection revealed the piece has eyes and a beak at each end.

Dr Blackwood said these represent the head of a bird of prey pointing outwards from the centre of the object.

‘The decoration is quite clearly Christian,’ she said, ‘mixing old fashioned animal, protective motifs that you see on Anglo-Saxon art with very clear Christian iconography.

‘There are two panels, one on each side, and one has a symbolic cross made of geometric shapes, and the other looks like a pot plant.

‘And those twin motifs are the cross, as in the crucifixion, and the tree of life, which is about resurrection, so it’s about death and rebirth.

‘But you also have mythical beasts crawling up the sides, so there’s all sorts going on. It’s so visually rich, and it’s that which sets it apart from anything else that’s been found in the UK.’

Dr Blackwood said there is nothing yet to suggest there was a battle in the grounds in which the pommel, which would have been attached to a steel sword, was found.

The pommel was actually found in 2019 but the pandemic stopped its discovery being revealed until now (Credits: Unsplash)

Given there were no other finds nearby, experts presume the object was perhaps just lost. Dr Blackwood said the exciting find will play its part in piecing together some of Britain’s history.

‘The pommel has this fantastic fusion that certainly puts it in northern Britain, and then we find it in Scotland, so it’s a fascinating bundle of stories that will keep us busy for quite a long time.’

‘Sometimes people think when something goes into a museum it becomes fixed and static, but it’s not, it’s the start of research to untangle all the things about it, its artistic fusion, and understand and contextualise what that tells us about early medieval Scotland.’