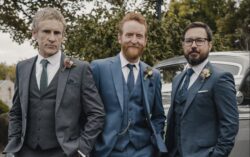 The Christmas TV season brings us many gifts but, let’s face it, a two-part drama about a middle-aged bloke asking his lifelong best mate to arrange his assisted suicide in Switzerland is not one that’s going to get the party started.

But, for a moment, let’s leave aside the Grinch-like motives of the schedulers who decided the hangover gap twist Christmas and New Year would be perfect for a spot of heart-stopping emotional catharsis.

Because, for all its dark subject matter, Mayflies might just be the most life-affirming two hours you’ll spend this festive season.

Buoyed up by engaging performances from Martin Compston and Tony Curran as buddies Jimmy and Tully, their teenage bond severely tested by Tully’s terminal diagnosis, Mayflies flits between the giddy freedom of a post-punk youth spent partying to New Order and The Skids, to the sombre present where livewire Tully’s life is fast fading.

Shot through with gallows humour and no little wisdom, this version of Andrew O’Hagan’s Scotland-set novel attempts a tricky balancing act, combining human drama with an exploration of the complicated issues around assisted suicide, with Tully’s wife Anna (Ashley Jensen) stridently opposing her husband’s desire to end his life.

There are times, particularly in the second episode, when the debate threatens to overshadow the drama. And the 1980s flashbacks, Tully and Jimmy’s gang of teenage party animals living it large sometimes verge on parody.

Yet though it’s easy to pick holes in Mayflies, one thing can’t be denied: the emotional climax, as Tully and his nearest and dearest face up to his fate, hit me like a sock in the jaw.

Prince Andrew The Musical review: Is the scandal really funny enough for a musical?

Well, by nailing its colours to the mast in what is an agonisingly difficult debate, Mayflies feels like a hymn of praise to the power of life and the power of choice.

I urge you to watch it: it’s not, to borrow Tully’s broad Scots vernacular, talking pish.