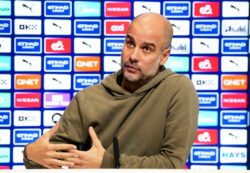 City have won four of the last five Premier League titles but are eight points behind the Gunners with a game in hand.

Guardiola’s side travel to Stamford Bridge on Thursday night to take on a Chelsea team who are all the way down in 10th in the table.

The Spaniard openly admitted he watched Arsenal’s 0-0 draw with Newcastle United on Tuesday night and that he is hoping their performance levels drop.

‘The way [Arsenal] played against Newcastle again impressed me a lot,’ Guardiola said.

‘They dropped two points but they didn’t drop the quality [with which] they played.

‘We have to be almost perfect, I would say, from here to the end of the season and hope they drop a little bit in their performance.

‘My target always as a manager is to try to be yourself and be better than the opponent, and after if you concede one shot and they score and we can’t score, you have to accept it and move forward.

He added: ‘Maybe it’s an advantage for the fact that… I don’t know how many years that [Arsenal] haven’t won the Premier League.

‘The advantage of Arsenal and Manchester United right now is nobody has to win the Premier League for 20 points ahead in November like Manchester City has to – and this is sometimes a big problem.

‘People say, ‘Ah, yes, you are…’ Yes, we are, but with Arsenal winning all their games and you are seven or eight points behind… [Arsenal winning the title] can happen.’

‘I hope [Arsenal] drop a little bit in their performance…’