Max doubles up to deny Lewis victory in US Grand Prix 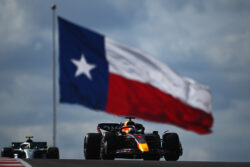 Max Verstappen profited from pole-sitter Carlos Sainz’s misery at the first corner and overcame a dreadful pit stop to deny Lewis Hamilton a first win of the season and claim victory in the US Grand Prix yesterday.

Sainz was sent spinning by Mercedes’ George Russell, having been passed by Verstappen, who clinched his second straight F1 title in Japan a fortnight ago, on the uphill gallop to Turn 1 at the Circuit of the Americas in Texas.

The Dutchman assumed control of the race in his Red Bull before Russell thudded into Sainz, sending the Ferrari spinning around.

Sainz stopped for repairs but was unable to continue. Valtteri Bottas’ spin forced a safety car on lap 18 and no sooner had the race restarted when it was back out following Fernando Alonso’s collision with Lance Stroll.

But Verstappen was left cursing after a tardy pit stop on lap 36 saw him emerge in sixth place. Hamilton, who started the race third, passed Sebastian Vettel to take the lead with Verstappen working his way up to second.

The pair then engaged in a ding-dong battle until Verstappen passed the Briton on the 50th of 56 laps and he pulled away to claim a record-equalling 13th win of the season and wrap up the constructors’ championship for Red Bull.


MORE : Red Bull still in dock as Lewis Hamilton looks to the future

The Dutchman claimed victory in the US Grand Prix.