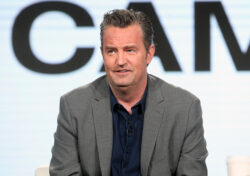 The actor and writer has been candid in his new memoir, and while talking about it (Picture: Getty)

Friends star Matthew Perry has revealed that he has spent at least $9million (£7.9m) to get sober.

The actor, 53, said that he spent a fortune trying to kick his drink and drug addictions, as he continues to promote his upcoming memoir Friends, Lovers and the Big Terrible Thing.

‘I’ve probably spent $9million (£7.9m) or something trying to get sober,’ he estimated in a new interview.

He also reflected on having spent more than half of his life in treatment centres or sober living facilities by the time he was 49.

The actor has been to rehab 15 times as he struggled with relapses over the years.

Inspired by the idea of helping other addicts and ‘sufferers’ with his memoir, he added to The New York Times: ‘Whenever I bumped into something that I didn’t really want to share, I would think of the people that I would be helping, and it would keep me going.’

Matthew said he wants to help others by revealing his own struggles (Picture: Walter McBride/WireImage)

Matthew also told People: ‘If you don’t have sobriety, you’re going to lose everything that you put in front of it, so my sobriety is right up there.

‘I’m an extremely grateful guy. I’m grateful to be alive, that’s for sure. And that gives me the possibility to do anything.’

The actor recently celebrated 18 months of sobriety following a near-death experience after his colon burst, resulting in a five-month hospitalisation and him using a colostomy bag.

During his lowest points, Matthew was taking 55 painkillers a day and weighed 128 pounds at one point during the 10-season run of Friends from 1994 to 2004, in which he starred as Chandler Bing.

He has also said that he only has to ‘look down’ at his stomach scars from 14 surgeries to remind himself to stay sober.

Matthew’s colon burst from opioid overuse, which at the time he said publicly was gastrointestinal perforation, and he confessed to the publication: ‘The doctors told my family that I had a 2% chance to live. I was put on a thing called an ECMO machine, which does all the breathing for your heart and your lungs. And that’s called a Hail Mary. No one survives that.’

The Studio 60 on the Sunset Strip actor says that he’s a ‘pretty healthy guy right now’ and points out that although relapses in sobriety will change your sober date ‘it doesn’t mean you lose all that time and education’.

Matthew recently revealed he was rejected by Jennifer Aniston (third from L) ahead of their casting on Friends (Picture: HBO Max Pop/Twitter)

He also recently revealed that he was rejected by his Friends co-star and now long-term close friend Jennifer Aniston ahead of their casting on the hit show that would change their lives.

He admitted he was ‘still crushing badly’ on her early on in the making of Friends, similar to David Schwimmer – who played Jennifer’s character Rachel Green’ love interest – who also said that he had ‘a major crush on Jen’ during the iconic HBO reunion show last year.

Frank offers confidential advice about drugs and addiction (email [email protected], message 82111 or call 0300 123 6600) or the NHS has information about getting help.

Adfam has local groups for families affected by drugs and alcohol and DrugFam offers phone and email support to people affected by other people’s drug or alcohol misuse.


MORE : Pioneering intimacy coordinator Ita O’Brien on being an industry trailblazer in the wake of #MeToo: ‘I didn’t jump on a bandwagon’

In his new memoir, the actor and writer is keen to help others who struggle.