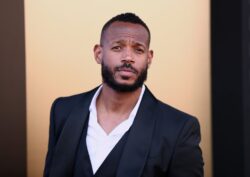 Marlon Wayans is prepared to do whatever it takes to protect White Chicks from cancel culture.

The actor starred alongside his brother, Shawn Wayans, in the popular 2004 comedy, which followed FBI agents going undercover as two white women in a bid to foil a kidnapping plot against them.

Terry Crews, Busy Phillips, Jaime King and Brittany Daniel also made up the cast, along with John Heard and Drew Sidora.

In the years since the release, some have suggested that the movie is inappropriate, but Marlon is having absolutely none of it.

‘I don’t know what planet we’re on, where you think people don’t need laughter, and that people need to be censored and cancelled,’ he told Buzzfeed. ‘If a joke is going to get me cancelled, thank you for doing me that favor.

‘Y’all do what you want to do? Great. I’m still going to tell my jokes the way I tell them. And if you want to make some money, jump on board. And if not, then I’ll find a way to do it myself.

‘I know my audience. My audience comes to my shows every weekend and they leave feeling great and laughing. One thing about the Wayans, we’ve always told the worst joke the best way.’

This isn’t the first time that the actor, who played Marcus Copeland and Tiffany Wilson in the flick, has defended his work against critics.

In a chat with Entertainment Weekly, he joked that they served as ‘equal opportunity offenders’.

‘You know who loves White Chicks the most? White chicks,’ he said in 2020. ‘That’s how you know it’s a good movie. A good joke in comedy is when the people you make fun of laugh the loudest.

Terrifier 2 really is as gruesome as they say, so take note of the warnings

Tim Burton gives update on Beetlejuice 2: ‘Nothing is out of the question’

‘What’s beautiful is that we’re equal-opportunity offenders. It was a great exploration of gender, of race, of pop culture, and done with kid gloves so everybody could laugh. And I think that’s what makes it a cult classic to this day.’

Marlon and Shawn have previously teased that a sequel could hit the big screen, with Paris Hilton and her sister, Nicky, keen to make cameos in the movie.


MORE : Joey Essex was in quarantine and on stand-by for huge I’m A Celebrity return as he teases third stint for all-stars series