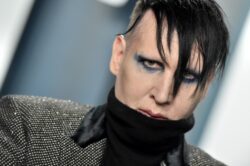 A court case against Marilyn Manson has been thrown out without prejudice as his accuser did not provide proper legal representation within the allotted time frame (Picture: FilmMagic)

A case against musician Marilyn Manson accusing him of abuse has been thrown out by a US judge.

The singer – real name Brian Hugh Warner – is accused by ex-girlfriend Ashley Morgan Smithline of having sexually, psychologically and physically abusing her throughout their two-year relationship which began in 2010.

Smithline is among several women who have come forward with accusations against Manson, 54, which he denies.

However a judge has now thrown the case out of court, with documents seen by The Mirror reportedly stating the judge did so as Smithline failed to provide proper legal representation within the allotted time frame.

Smithline had been represented by attorney Jay Ellwanger, however the outlet reports he ‘withdrew his representation’ in October, with Smithline told to either get a new lawyer or declare she would be representing herself by December 5.

Having seemingly done neither, the court has dismissed the case ‘without prejudice.’

Singer Manson has denied all accusations against him from multiple women (Picture: Rex/Shutterstock)

Wood, who dated Manson for three years and was briefly engaged to him in 2010, initially accused him in a social media post, writing: ‘The name of my abuser is Brian Warner, also known to the world as Marilyn Manson’.

She accused the rocker of grooming, brainwashing and ‘horrifically abusing’ her during their relationship, which began when she was 18 and he was 38.

In a bombshell report by Rolling Stone magazine in November 2021 which includes accounts of his accusers, it was said the singer allegedly converted a cramped glass vocal booth in his West Hollywood flat into a ‘cell.’

Manson denies the accusations, including those by former fiance Evan Rachel Wood, whom he began dating when he was 38 and she was 18 (Picture: Picture)

There were claims the Tainted Love singer tortured women as punishment for perceived minor transgressions.

Smithline had alleged he repeatedly forced her into the soundproof confinement booth – dubbed the Bad Girls Room – for hours.

His former assistant Ashley Walters, who is also suing Manson for sexual assault, claimed he would ‘brag’ to people about the room.

Manson has denied all the claims, stating his relationships ‘have always been entirely consensual’, and called the accusations ‘horrible distortions of reality’.

He has since filed a lawsuit against Westworld star Wood for defamation, fraud, and emotional distress, accusing her of ‘publicly casting him as an abuser – a ‘falsehood’ he claims that has ‘derailed’ his career.


MORE : Evan Rachel Wood ‘not scared but sad’ about Marilyn Manson lawsuit against her: ‘This is part of the retaliation that keeps survivors quiet’


MORE : Evan Rachel Wood accuses Marilyn Manson of drugging and raping her while she slept

Multiple women have accused Manson of abuse, with the singer denying all the claims.