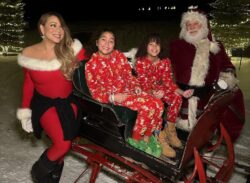 Mariah Carey celebrated the festive season in exactly the fashion you would expect of the Queen of Christmas – and yes, it included Santa and his sleigh pulled by reindeer.

Well, we already know by now that she doesn’t do things by halves, right?

On Christmas Eve she shared pictures of herself and Baby Blitzen the reindeer posing for pics.

The All I Want for Christmas chart-topper, who reached number one with the tune in the UK just a few weeks ago but was beaten by LadBaby over Christmas itself, was dressed in a red Lycra off-the-shoulder Santa onesie with white fur trim and woollen gloves.

She bent down to introduce herself to her new furry friend as the rest of Santa’s reindeer looked on before posing for the snaps.

‘Santa makes a pit stop at our lair with Baby Blitzen in tow for her first public appearance! Sooooo cute!!! 🦌😍’ she wrote in the caption on Christmas Eve.

On the big day itself, she returned to share more photos from their outing to celebrate December 25.

One showed the 52-year-old flanking the sleigh with Santa while her two kids – twins Moroccan and Monroe, 11, who she shares with ex-husband Nick Cannon – sat inside in red patterned fleecy onesies.

Dancer boyfriend Bryan Tanaka, whose been spending time with the family in Aspen, Colorado for the holidays, commented underneath the snaps: ‘Merry Christmas! 😘👑🎄🦋❤️’

Another fan joked: ‘The perfect Christmas pictures do not exis….,’ while writer and producer Lee Daniels commented with a string of red heart emoji.

After her festive two-hour concert special, Mariah Carey: Merry Christmas To All!, aired in the US on Tuesday, where she duetted with daughter Monroe in matching white ballgowns, the co-writer of her smash Christmas hit slammed Mariah’s claims she wrote it ‘as a kid’.

Do you think Mariah should have finally claimed Christmas number one this year?Comment Now

The All I Want For Christmas chart-topper sang with daughter Monroe on her festive TV special (Picture: CBS)

Walter Afanasieff – who also worked on the star’s 1993 Music Box album – has a different version of events, and said the alternate story started to emerge ‘probably 10 years ago’ after they were both ‘on the same page’ about how it was written.

He alleged that Mariah ‘doesn’t understand music, she doesn’t know chord changes and music theory or anything like that’, making her claim to have written it on ‘her little Casio keyboard’ as a little girl ‘kind of a tall tale’ in his eyes.

Mariah and Walter are both credited as writers and producers on All I Want For Christmas Is You, which has previously been reported to have taken only 15 minutes to write.


MORE : Greg James stuck in standstill Christmas Day traffic on M40: ‘Give my regards to your pigs in blankets’

Would you expect anything less?