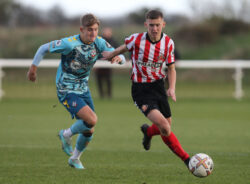 Chris Rigg (right) is one of the brightest young talents in the country (Picture: Getty Images)

Manchester United are interested in Sunderland teenager Chris Rigg, but face competition from other Premier League sides for the highly-rate youngster.

The 15-year-old is considered to be one of the brightest talents in the country, for his age, and has attracted the attention of Newcastle United and Everton as well as the Red Devils.

The Sun reports that Newcastle are best placed to sign the talented teenager, but Manchester United are hoping to beat their rivals to the exciting midfielder.

Rigg has already captain England’s Under-16 side, and although he is yet to make his debut for the Sunderland first team, much is expected of him in the future.

The youngster has been valued at around £2.5m, so it would not be seen as much of a gamble for a Premier League club to bring him in from the Stadium of Light.

The teenager has been on the fringes of the first team squad at Sunderland, training with the senior players, but not quite being called upon by manager Tony Mowbray.

The Black Cats are going well in the Championship, sitting fourth in the table, a long way behind the top two but looking good to mount a challenge for the Play-Offs.

Burnley and Sheffield United are impressing most in the second tier, with the Clarets on 53 points and the Blades on 50, comfortably clear of Blackburn in third on 39 points and then Sunderland on 37 ahead of the action on New Year’s Day.

The 15-year-old is wanted by a string of Premier League clubs.