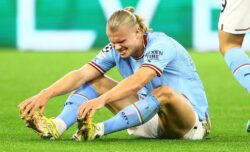 Manchester City have received a positive injury update after Erling Haaland was spotted limping towards a medical centre on Wednesday.

The Norway international was replaced at half time in City’s goalless draw with Borussia Dortmund in the Champions League on Tuesday evening.

Haaland, who had complained about a foot injury during the match, went for tests at the Manchester Institute of Health & Performance close to City’s training ground.

And according to the Daily Star, Haaland has been cleared of any ‘serious damage’ to his foot.

Haaland was also able to leave the medical centre still wearing flip flops and did not have a protective boot or crutches.

The 22-year-old, who has already scored 22 goals this season, now appears to be in contention for City’s Premier League clash with Leicester City on Saturday.

Speaking about Haaland after City’s draw with Dortmund, Guardiola said: ‘[There were] three things. I saw him so tired.

‘Second one, he had a little bit of influenza in his body. Like Joao, Joao had a fever.

‘Then the third, he had a knock in his foot. That’s why he was not able to play the second half.

‘I spoke with [the medical staff] at half-time and they were a little bit concerned, but I saw him walking more or less normally. We will see.’

Haaland was spotted limping towards a medical centre on Wednesday.