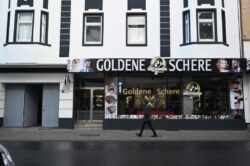 An Iranian man has been detained on suspicion of planning an attack with deadly chemicals in Germany.

The suspect is accused of seeking to obtain cyanide and ricin while planning a serious attack motivated by Islamic extremism.

It’s currently unclear whether a target had been selected or how far advanced the alleged plot was.

Even small amounts of ricin can be fatal to an adult if eaten, injected or inhaled.

Another person was also arrested overnight in connection to the case in the town of Castrop-Rauxel, north-west of Dortmund.

An initial search of a home resulted in no toxic substances, German news agency dpa reported a spokesman for Duesseldorf prosecutors as saying.

The arrests were made after authorities got ‘a serious tip that led police to intervene the same night’, Herbert Reul, the top security official for North Rhine-Westphalia state, reportedly said.

A man walks past a house in Castrop-Rauxel, western Germany, January 8, 2023 (Picture: AFP via Getty Images)

TV cameras are set up in front of a building after German police took a 32-year-old Iranian citizen into custody (Picture: Reuters)

An allied intelligence agency handed over the information, according to tabloid newspaper Bild.

Dpa cited an unidentified German security official as saying there was no indication the suspect had acted on behalf of the Iranian state. He is said to have instead supported a Sunni extremist group.

She added that 21 Islamist attacks have been prevented in Germany since the start of the century.

Further investigations by Duesseldorf prosecutors will show if the suspicions that triggered the police operation were warranted, Ms Faser said.

Even small amounts of ricin can be fatal to an adult if eaten, injected or inhaled.