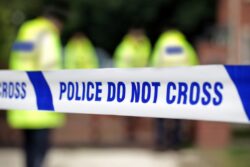 He was approached by a group of people before he was knifed, it’s believed (Picture: Getty Images/iStockphoto)

A man has been killed on the dance floor of a nightclub while partying with friends on Boxing Day.

A murder investigation has been launched following the horrendous attack in Birmingham.

The 23-year-old victim was approached by a group of people before he was knifed around 11.45pm, it’s believed.

Emergency services rushed to the scene at The Crane nightclub on Adderley Street in Digbeth.

Despite desperate efforts to save him, the young man was pronounced dead around 30 minutes later.

An urgent hunt has been launched to track down those responsible. There have been no arrests.

Detectives are viewing CCTV from the nightclub and are urging anyone who was in the area at the time to get in touch.

Detective Inspector Michelle Thurgood, who is leading the investigation, said: ‘This was a young man enjoying himself with friends on a Boxing Day night out and our thoughts are with his friends and family today.

‘We know there were hundreds of people in the nightclub at the time.

‘While we’ve spoken to a number of them already, we still need to hear from anyone who was there and who witnessed or even filmed what happened.

‘We believe that the victim was approached by a group of people, and was then stabbed, so we’re working hard to identify all of those involved.’

Neighbourhood officers will be patrolling the area over the coming days to offer reassurance to locals.

He was approached by a group of people before he was knifed, it’s believed.