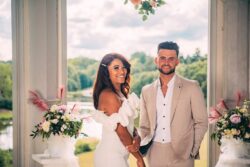 Married At First Sight UK’s Jordan Emmett Connelly has vowed to ‘try and keep’ Chanita Stephenson in his life, after it was revealed he dumped her over FaceTime.

Meanwhile, Chanita earlier spoke to Metro.co.uk about how she ‘deserved better’ and was left questioning how ‘genuine’ Jordan was after the experiment.

Chanita and Jordan stunned viewers during the reunion episode when they walked into the dinner party alone, and tearfully shared that they were no longer together.

The couple had been one of the strongest this series, with all of us voting in their favour, including their fellow contestants and the experts.

And while they admitted they’re ‘rekindling’ their romance, Chanita’s opened up about the rollercoaster they’re still on, and spoke about how Jordan’s ‘actions not his words’ need to change.

In a lengthy post on Instagram today, Jordan penned: ‘So you may have noticed I have been really quiet on my socials lately, I needed to give myself adequate time to digest/reflect on the experience and to then get myself into a position to tackle everyone’s opinion and the hate which comes with it.

‘I can’t express how difficult it has been to deal with the fact that I have upset Chanita to the extent I have, I am not a bad person, but I handled the situation badly, and I take full accountability and have learnt an important lesson.

‘If I could turn back the clock and change things I would but unfortunately that’s not possible.

‘As with anyone in the world, I have my own feelings and my own flaws. I don’t handle my emotions the best at times, I sometimes don’t think logically and my impulsiveness gets me into situations that I don’t want to be in.’

He continued: ‘Regardless of what you may think of me, I can wholeheartedly say that I went into that process 100% myself, I wasn’t trying to portray a certain image, I wasn’t playing up the cameras, I didn’t want to be anything after the show, and I certainly wasn’t trying to fake a relationship. All I wanted was to find love.

‘I think going into these shows you need to remind yourself that you are open for judgement, regardless of the tiny percentage of your relationship that people see, and that you need to fully accept and appreciate the opinion of those watching.

‘I am getting plenty of messages telling me that I will never get better, how I have messed up and how I am an idiot (they are phrased a bit more harshly), but I need to remind myself that I have my own feelings, and I am the only person accountable for my feelings.

‘Chanita is an amazing person, I still have strong feelings and I care for her more than she will ever know. From the bottom of my heart, all I want is for her to be happy. I am so grateful that we shared this experience together.

Jordan and Chanita were one of the strongest couples this series (Picture: Matt Monfredi Ltd)

‘We have laughed, cried, and experienced every other emotion in between with each other. We truly seen and done it all, and I love us for that.

‘We continue to speak every day, and I will do everything I can to try and keep her in my life.’

Jordan concluded by thanking fans for the love and support, saying ‘It’s been a crazy ride.’

This comes after Chanita exclusively told Metro.co.uk that, despite him breaking things off over FaceTime after filming the series, they’re still on their own little rollercoaster.

She told us: ‘We’re still on our own little rollercoaster, you know, watching the show it’s hard, and the feelings get brought back up.

‘Jordan’s spoken out since the show and he’s said that he wants to make things happen and try and get me back, but I suppose for me it’s more about his actions not his words.

‘I’m here for the apology and I loved that the recognises that some of his behaviour and actions have not been good, but I’m more now concentrating on the actions rather than the words.’

While Chanita believes that Jordan stayed genuine and true to himself during the experiment while filming, she did admit ‘questioning his motives’ after the dumping.

‘I think he is [genuine]’, she told us, continuing: ‘But I think he says a lot of stuff he doesn’t realise, and I don’t think he realises at times what he’s doing and what he says.

‘He’s so impulsive and says something without thinking, and I think watching the show back it is difficult because he was questioned by the others.’

She continued: ‘I’d like to think yeah [he is genuine], but I can’t lie, I have had to question his motives just because of how things have ended. I suppose that’s the cynical side of me.

‘And you know, that’s what the mind does, doesn’t it? It starts wondering and you’re thinking all starts, and I have thought about it but I would like to think he has been genuine.’

Married At First Sight UK is available to watch on All 4.


MORE : MAFS UK’s Chanita and Jordan are still ‘going through rollercoaster’ as she opens up on pain from his dumping: ‘I deserved better’


MORE : MAFS UK’s Sophie opens up about discovering ADHD diagnosis during filming show: ‘I have to battle with it’

Jordan opened up about upsetting Chanita.