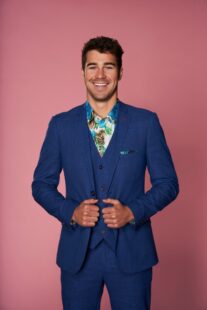 Love Is Blind season three has finally dropped on Netflix, transporting viewers back to those iconic pods.

The third series has a fresh batch of singletons ready to fall in love and get engaged, without having ever met the person they want to spend the rest of their life with.

However, while we’re all marveling at how fast and deep those connections are, fans have questioned if there is any connection between new contestant Cole Barnett and season one star Matthew Barnett, who eventually married Amber Pike.

Seeing as they share the same surname, many are convinced that they are somehow related, and revealed their thoughts on social media.

‘So Matt “Barnett” from season 1 is related to Cole from this season, cannot convince me otherwise. #LoveIsBlind,’ one tweeted.

‘OMG! Cole last name is real Barnett! He is really the Barnett 2.0 #LoveIsBlind3 #loveisblind,’ another commented.

He has no relation to Matthew Barnett from season one (Picture: Netflix)

‘Both have the surname Barnett… these two have to be related!!! #LoveisBlindS3 #loveisblind,’ a follower penned.

A Twitter user questioned: ‘I know that Cole and Barnett are technically two different people…but are they?? #LoveIsBlind.’

As a viewer joked: ‘How is Amber and Barnett’s kid already on the show? #LoveIsBlind3 #LoveIsBlind.’

Just in case there is any confusion, they are definitely not related.

The official Love Is Blind Instagram page made light of the reaction and shared side-by-side snaps of both Cole and Matt on Instagram.

‘Every season needs a Barnett,’ the caption read, with the account clarifying in the comments that there was ‘no relation’ between the stars,

So Matt âBarnettâ from season 1 is related to Cole from this season, cannot convince me otherwise. #LoveIsBlind

The original Barnett of the pods was living for the meme and replied: ‘I did live right outside of Dallas for a few years in my early 20s… just sayin’.’

Cole later shared the upload on his own Instagram story, adding: ‘I guess he’s the brother I never knew I had.’

So far, the newbie has been causing just as much chaos in the pods as his namesake, flirting up a storm with multiple women.

However, he formed the strongest connection with Zanab Jaffrey, popping the question despite never having met her.

Not hesitating for a second, she agreed and they finally laid eyes on one another, before jetting away on a getaway with their co-stars.

However, as they are inching closer to their wedding day, cracks are beginning to show between the couple – but can they make it to the altar and live happily ever after?

We can’t wait to find out…

Love Is Blind is available to stream on Netflix.