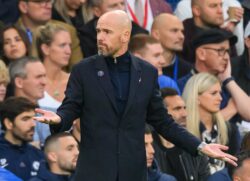 Erik ten Hag has worked in tandem with Edwin van der Sar during their time together at Ajax (Picture: Getty)

United made significant changes over the summer with the appointment of a new manager in Erik ten Hag, who is keen to work in a similar model to the one he grew accustomed to at the Dutch club.

Van der Sar worked in tandem with Ten Hag during their time together at Ajax and United’s legendary ex-goalkeeper has regularly been linked with a return to Old Trafford.

Asked whether the current Ajax CEO would represent a shrewd appointment, Saha told ggrecon.com: ‘Completely, yes. This guy is such a smart lad.

‘He’s very honest and he has total dedication to his players. Being the CEO of Ajax and understanding the parameters you have, and I say this with all due respect, but you’re helping all these young talents get moves to even bigger clubs and that’s been the formula of Ajax for many years. They’ve become such an attraction for young players due to this.

‘I hope Manchester United really push for Edwin because he’s the perfect profile for the position because he knows the club inside-out, he wants to improve youngsters and make good business for the club he represents.’

The prospect of the the 51-year-old, who won eight major honours during his six years at United, would appear remote after he committed his future to Ajax earlier this week.

Edwin van der Sar has been linked with a return to Manchester United (Picture: Getty)

‘It’s never been that close,’ Van der Sar told The Times. ‘I have a good relationship with the board and I had a fantastic six years in Manchester, but I’m not finished here yet.’

Van der Sar also admits that he felt both Antony and Lisandro Martinez should have remained at Ajax for another season.

Instead, the duo were reunited with Erik ten Hag as United spent over £140 million on bringing them to Old Trafford.

‘It was our opinion they should stay for another year,’ Van der Sar said of Antony and Martinez.

‘We gave a firm ‘no’ to Arsenal when they came first for Lisandro; we fought hard to keep him.

‘It was [an] economic [decision] but it was a hard one to take. We knew there was interest but not at that level and it was too late to find a good replacement.

‘I don’t think the way [Antony] handled it was the correct one, but it’s important all the players who leave Ajax have success because it reflects well on us.’