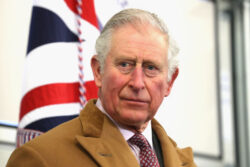 The Loose Women panel have desperately implored King Charles III to call for a general election after Liz Truss’ resignation as Prime Minister.

Following the announcement the politician made outside No 10 Downing Street on Thursday, it’s been claimed that Boris Johnson and Rishi Sunak could be going head to head in the Tory leadership race.

However, many people are incensed that a general election hasn’t been called before a new Conservative leader is revealed, including the stars of Loose Women.

On Friday’s show, Nadia Sawalha – who called Ms Truss’ resignation speech a ‘disgrace’ with ‘no apology’ – turned to her co-star Judi Love to plead her to use her royal connection, referring to the fact that she met then-Prince Charles at a Buckingham Palace reception earlier this year.

‘You could be our last hope,’ Sawalha said, as shocked expression dawned on Love’s face

‘Quite the personality he has,’ Love said, impersonating the royal’s famous accent.

Love recalled meeting the now King as she begged him to take action (Picture: ITV)

The comedian then added animatedly: ‘Everyone’s saying call it King Charles, call it!’

‘Give us the chance to have our say!’ Sawalha piped up.

Charlene White explained to the audience that King Charles ‘does hold the power to dissolve Parliament’, a power that she said was last used in 1834 by King William IV.

She then turned to the audience to see if they agreed with the notion of the monarch calling for an election voted on by the public, with the majority raising their hands.

The majority of the audience agreed that they want a general election to take place (Picture: ITV)

King William IV’s actions in 1834 marked the last time that a monarch challenge the authority of a government that had been elected by the public.

On the government’s website, it explains that the Dissolution and Calling of Parliament Act 2022 ‘revived the power of the monarch to dissolve Parliament, at the request of the Prime Minister of the day’.

This means that King Charles III would likely not dissolve Parliament unless requested to do so.

Games Inbox: Should there be another Resident Evil 1 remake?

Nonetheless, many people are still requesting for the monarch to step in, with one tweeting: ’Time for King Charles to earn his title and privileges and dissolve this Parliament and call an election, enough.’

‘We need a King who will act like a King. Come on King Charles III. Put an end to the destruction of our democracy. Dissolve this parliament and call a general election,’ another wrote.


MORE : Loose Women viewers call for regular fixture of Loose Men after all-Black panel: ‘I wish we could have this show every week’

‘Give us the chance to have our say!’