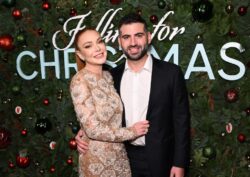 Lindsay Lohan gave us a glimpse into her festive celebrations with Bader Shammas (Picture: Getty)

Lindsay Lohan got into the festive spirit with husband Bader Shammas as they spent their first Christmas together as husband and wife.

The Falling for Christmas actress, who staged an epic return to the spotlight in 2022, shared a snap with her beau, 35, to mark the holidays.

Taking to Instagram over the weekend, the 36-year-old blessed fans with a sweet photo as they posed in front of a fully decorated tree.

She also posted a solo shot, glowing ahead of their poignant celebrations.

Alongside the upload, she simply penned: ‘Merry Christmas Everyone!’

Right on cue, fans and famous faces flooded her comments section with love and praise.

‘Merry Christmas Lindsay to you and your family,’ a follower said. ‘Wish you all the best in 2023.’

‘Merry Christmas and what a gorgeous picture,’ one wrote.

As an Instagram user added: ‘You look radiant, merry Christmas.’

Lindsay came to fame at a very young age, starring in the Parent Trap when she was just 11 years old, before going on to carve a hugely successful film career.

She stepped out of the public eye a few years ago to focus on herself, making the move over to Dubai.

The Mean Girls icon started dating Bader in Dubai, five years after her relocation, and has never looked back.

Lindsay and Bader got married in April (Picture: Instagram)

The pair tied the knot in April, but kept tight-lipped over their nuptials at the time.

In a recent appearance on the Drew Barrymore Show, she explained that he popped the question while she was hard at work on her Netflix comeback.

‘We got married in April actually, but the hardest thing was he proposed to me on the set of Falling For Christmas,’ she said.

‘Not [literally] on the set, but off set when we were filming, and I had to not tell anyone because I didn’t want it to distract it from our work and stuff so I was holding in that I was engaged.

‘I did know right away. I said it to him. I was like, “I think I’m going to marry you one day” but I think he thought I was crazy.


MORE : From Craig David to a Friends star: My The Masked Singer predictions so far based solely on the costumes alone…