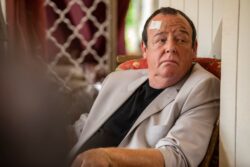 Death in Paradise viewers have been left stunned at Les Dennis’ psychic transformation during the Christmas special.

The 69-year-old actor starred as Danny Sheridan, a mysterious psychic with blonde dyed hair and a fake tan.

He joined the likes of Derry Girls’ Siobhan McSweeney and Bradley Walsh’s son Barney as they jetted off to Saint Marie.

However, viewers were distracted by Les’ new look, with one writing: ‘Last night watched Death In Paradise – @LesDennis was unrecognisable as a Scouse psychic grifter! Particularly enjoyed the hair dye.’

Another penned: ‘Been sitting there watching Death In Paradise special saying to myself I know that guy, took me 50 mins to work out I’m pretty sure it’s Les Dennis! I need to be better!’

‘@LesDennis I’m just catching up on #DeathInParadise !! I had to rewind to check the credits I literally shouted out loud is that Les Dennis. fantastic!!!!!!’ someone else wrote.

Ahead of the episode, Les had told press, having seen some of the fan reaction to his new look after posting a teaser on social media: ‘I was really surprised by it. At the moment, I’ve got a full ‘tache for Granddad in Only Fools and Horses.’

@LesDennis Iâm just catching up on #DeathInParadise !! I had to rewind to check the credits ð I literally shouted out loud is that Les Dennis ð fantastic!!!!!!

I canât believe Iâm the only person who did a double take (several times)#deathinparadise #lesdennis pic.twitter.com/5zE6RyNGzE

Been sitting there watching Death In Paradise special saying to myself I know that guy, took me 50 mins to work out I’m pretty sure it’s Les Dennis! I need to be better!

He continued: ‘So whenever I play a different character, I will sometimes change the way I look. But I suppose it was the black hair of Danny Sheridan…kind of deranged Jack Nicholson, I think, how can you get more deranged than Jack Nicholson anyway?

‘I was pleased with that, because it means that I’m inhabiting a role, and they’re interested to see who that character is.’

Les added that the hair dye took a lot of maintenance, forcing him to ‘be in makeup for about an hour and a half’ in the morning and admitting ‘it was very tricky to get out every night.’

‘I loved the fact that at first, I didn’t realise they were going to make my character look so different. On the first day I was thinking, “is this right?”

‘When I saw what they did, the makeup department were just brilliant.. This is Danny Sherid.’

The show’s second-ever festive spectacular had a real spooky element to it, with the BBC teasing: ‘Christmas in Saint Marie takes a spooky turn this year when an old case of Selwyn’s comes back to haunt him following the murder of a true crime podcaster on the hunt for a missing child.’

The synopsis continues: ‘Marlon is forced to spend the night in a haunted house and Darlene takes a hard look at her life choices. And after a chance encounter in an airport car park, could love finally be in the air for Neville Parker?’

Death in Paradise is available to watch on BBC iPlayer.


MORE : Death In Paradise: What time is the Christmas special and who is in the cast?