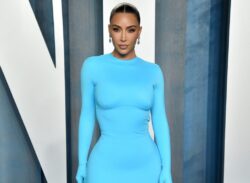 Kim Kardashian spoke out over the outrage directed at her concerning the controversial Balenciaga campaign (Picture: Getty)

Kim Kardashian has addressed the backlash she received over her response to the Balenciaga scandal, insisting that she ‘couldn’t have been more clear’ with her stance.

The luxury fashion brand sparked widespread fury after a recent campaign emerged online, including pictures of children posing with teddy bears in bondage.

Bosses initially spoke out over the outrage, before issuing a further apology for ‘displaying unsettling documents’ in some photos.

The 42-year-old has built a strong relationship with the company over the last few years, taking part in numerous campaigns and modeling on the catwalk at a star-studded fashion show in July.

Following the campaign, she announced that she would be ‘re-evaluating’ her professional ties, with fans calling for more action to be taken.

During an emotional appearance on the Angie Martinez IRL podcast, in which she also broke down about ex-husband Kanye West, the mom-of-four hit out at the outrage directed at her.

‘And then as soon as I saw what everyone was seeing on the internet and the reality of the situation, I completely spoke out and gave my thoughts … and completely denounced it.

Kim was slammed for not condemning the brand immediately (Picture: FilmMagic)

‘They’re just mad that, if you don’t cancel someone in today’s society… I know people talk about cancel culture and how crazy it is, but it’s still happening. And so it’s never been my place.’

Kim continued: ‘The whole point of life is to make mistakes, is to grow and evolve and be better people.

‘Obviously there is absolutely no place for an ounce to even play with anything with children, any sexualization of children – there’s not an ounce of that that should be in our brains and in our society, I get that.

‘I couldn’t have been more clear on, this is horrifying, this is disturbing. But unless they heard what they wanted to hear, it’s like, f**k you, you’re cancelled.

I have been quiet for the past few days, not because I havenât been disgusted and outraged by the recent Balenciaga campaigns, but because I wanted an opportunity to speak to their team to understand for myself how this could have happened.

‘You definitely can’t win, no matter what you can’t win. But I’ll still be me.

Fans took aim at the Skims designer for not being among the first to speak out over the controversial campaign – but she explained that she reached out to the brand’s team for answers before sharing her thoughts.

‘I have been quiet for the past few days, not because I haven’t been disgusted and outraged by the recent Balenciaga campaigns, but because I wanted an opportunity to speak to their team to understand for myself how this could have happened,’ she said at the time.

‘As a mother of four, I have been shaken by the disturbing images. The safety of children must be held with the highest regard and any attempts to normalize child abuse of any kind should have no place in our society – period.

She also discussed ‘cancel culture’ in the chat (Picture: Getty)

‘I appreciate Balenciaga’s removal of the campaigns and apology. In speaking with them, I believe they understand the seriousness of the issue and will take the necessary measures for this to never happen again.’

In a later post, she added: ‘As for my future with Balenciaga, I am currently re-evaluating my relationship with the brand, basing it off their willingness to accept accountability for something that should have never happened to begin with – & the actions I am expecting to see them take to protect children.’

Balenciaga bosses also addressed the fury, saying: ‘Our plush bear bags should not have been featured with children in this campaign. We have immediately removed the campaign from all platforms.’

They later apologized for the appearance of ‘unsettling documents’ in the photos, appearing to refer to documents from a Supreme Court case relating to child pornography laws.

‘We apologize for displaying unsettling documents in our campaign,’ they added in a separate statement. ‘We take this matter very seriously and are taking legal action against the parties responsible for creating the set and including unapproved items for our Spring 23 campaign photoshoot.

‘We strongly condemn abuse of children in any form. We stand for children safety and well-being.’

‘I couldn’t have been more clear.’