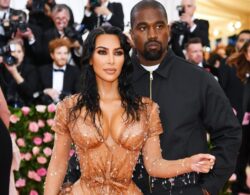 The Praise God rapper has been banned from Instagram and Twitter in recent weeks after he made strong comments directed to the Jewish community – and said he was going ‘death con 3 [defcon 3] on Jewish people’.

Since the incident, Vogue and Balenciaga announced that they were cutting ties with the dad-of-four, with many stars voicing their fury at his words.

Taking to Twitter, Kim – who filed for divorce from the Yeezy designer last February – joined those speaking out in support of the Jewish community.

‘I stand together with the Jewish community and call on the terrible violence and hateful rhetoric towards them to come to an immediate end.’

Hate speech is never OK or excusable. I stand together with the Jewish community and call on the terrible violence and hateful rhetoric towards them to come to an immediate end.

The Kardashians star’s words come after Boy George previously slammed her for being publicly silent on her former partner’s comments, which were shared more than two weeks ago.

‘I’m kind of appalled that not more artists have come out and spoke against what he’s saying,’ the Culture Club musician said in a tearful Instagram video on Saturday.

‘I’m appalled that Kim Kardashian hasn’t come out and added her voice to this debate, because this woman has children with Kanye.

Kanye later apologized for his comments in an interview with Piers Morgan (Picture: FilmMagic)

‘So she must understand as a mother what it feels like for little Jewish children to hear these f**king comments, how demoralizing and terrifying it must be.

‘As a gay man I have experienced years of prejudice, you know, so the idea of doing that to someone else based on their race or their color or their sexuality or their gender is just f**king appalling to me, and it should be appalling to you.’

Last week, Kanye touched on his highly criticized comments during an interview with Piers Morgan, and eventually apologized for his now-removed posts.

When the former Good Morning Britain host questioned whether he regretted his stance, he initially said: ‘No, absolutely not.’

Changing his mind shortly after, he added: ‘I will say, I’m sorry for the people that I hurt with the Defcon… the confusion that I caused.

‘I feel like I caused hurt and confusion and I’m sorry for the families that had nothing to do with the trauma that I had been through.


MORE : Friends star Matthew Perry reveals why he broke up with Julia Roberts: ‘I could never be enough’