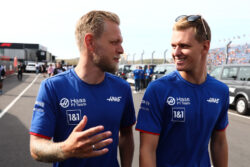 Kevin Magnussen has a contract with Haas for next year but Mick Schumacher does not (Photo: Getty)

Kevin Magnussen is hopeful that Mick Schumacher will be on the grid for 2023, with his Haas teammate out of contract at the end of the season.

Schumacher’s Formula One future hangs in the balance, with Haas yet to announce who will be racing alongside Magnussen next year.

Former Force India and Renault driver Nico Hulkenberg and ex-Alfa Romeo racer Antonio Giovinazzi are in contention to replace Schumacher who has endured a mixed second campaign in F1.

The 23-year-old German struggled a lot at the beginning of the season, way off the pace of his teammate, and was involved in several huge and expensive crashes that earned the ire of Steiner and Haas.

However, his form began to turnaround with impressive performances in Great Britain and Austria where he held his own in duels against Max Verstappen and Sir Lewis Hamilton.

Since the half-way point of the season, he has matched Magnussen for pace yet remains 16th in the standings with just four races to go.

Ahead of this weekend’s United States Grand Prix, Haas’ home race, Magnussen issued his support for Schumacher, saying: ‘First of all, I haven’t had any influence on what’s been going on with drivers – that’s totally out of my hands.

Haas are eighth in the standings (Photo: Getty)

‘If I just look at Mick, I think he’s really been improving all year. He started off maybe not really liking the car and lacking a bit of confidence, but he’s really gained that.

‘Lately, he’s been super hard to beat, for me. I think, [with] the way he’s driving right now, he definitely deserves a place on the grid. But again, it’s totally out of my hands, and I can only sort of just wish him well.’

Schumacher has also been linked with the vacant seat at Williams, though he is not the favourite for it, with rumours suggesting that American F2 driver Logan Sargeant will be announced for 2023 at Austin this weekend.

In other news, Haas have announced a new title sponsor for 2023, MoneyGram, having cancelled their partnership with Russian company Urakali just before the start of the current season due to the invasion of Ukraine.


MORE : Red Bull still in dock as Lewis Hamilton looks to the future

Will Magnussen and Schumacher be teammates next year?