Kanye West’s surprise cameo in Glass Onion leaves viewers baffled – but did you catch it? 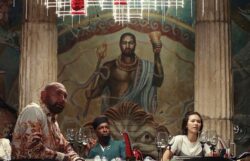 Are you convinced the mural is of Kanye West? (Picture: Backgrid)

It’s been almost a week since Glass Onion was released to Netflix, but we’re still catching Easter eggs all over the shop, such as Kanye West’s surprise appearance in the film.

The Knives Out sequel sees Daniel Craig reprise his role as world-famous private investigator Benoit Blanc, who finds himself invited to a tech billionaire’s private island to solve a murder mystery.

However, there are several other random cameos from a range of stars and Grammy-winning rapper Kanye, 45, is the latest one viewers are in a frenzy over.

The All Of The Lights hitmaker subtly appears in a scene where the guests of said billionaire tech mogul Miles Bron (Norton) are sat around a grand table in an equally grand room – for perspective, the actual Mona Lisa casually takes pride of place in the centre.

On a wall behind the guests is a pretty large mural of Kanye’s likeness, with the rapper shown as a messiah-like figure wearing robes and holding a gold chalice. Many have drawn comparisons to the portrait and the imagery used on promo material for Kanye’s 2010 album My Beautiful Dark Twisted Fantasy.

Favorite part of Glass Onion was the Kanye West mural they obviously cut a reference to in light of recent events pic.twitter.com/ToUWljL92y

Rewatching #GlassOnion and I have to know, @rianjohnson is this kanye? pic.twitter.com/BrB3T2CQa4

However, there’s no mention of the mural at any point in the film, which was shot in 2021 before Kanye’s antisemitism controversy unfolded in real life this year, and viewers were baffled as to its context.

‘Ok #GlassOnion was really good. but the wildest part to me was the Kanye painting behind the dining table,’ one viewer tweeted.

One joined in: ‘Rewatching #GlassOnion and I have to know, @rianjohnson is this kanye?’

‘Ok, I’m glad other people spotted that Kanye painting in #GlassOnion. I thought it was Michael B Jordan at first and then I couldn’t stop staring at it once I realized how perfect a Kanye portrait was in the part of the movie where it shows up,’ another commented.

Of course, there’s no confirmation that the mural is indeed of Kanye but it has a darn good resemblance.

Kanye isn’t the only celebrity to make a surprise appearance, as Serena Williams makes an actual cameo in one scene, while Hugh Grant shows up as investigator Benoit’s rumoured partner.

Glass Onion is available to stream on Netflix.


MORE : Where is Glass Onion filmed? All the locations from Knives Out sequel


MORE : Glass Onion director Rian Johnson is annoyed that ‘Knives Out’ is included in full title

If you blinked, you may have missed it.