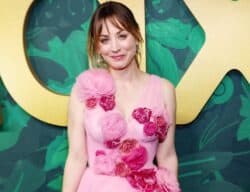 Kaley Cuoco is preparing for the David Livingston/Getty Images)

Kaley Cuoco is bumping along as she shared her growing baby bump on holiday with her boyfriend Tom Pelphrey.

The Big Bang Theory star, 37, is expecting her first baby with Tom, 40, and has kept fans updated on how she’s going through some sweet travel snaps.

Apparently drip-feeding the photos through to fans on her page, after sharing snaps last week, Kaley returned with a carousel of sweet images on Thursday, which saw her showing off her bump on a picturesque tropical getaway.

In one photo taken of a Polaroid, the actress was seen wearing only a blue and white-striped shirt as she left it open to expose her baby bump, while in another her partner was seen seemingly fresh from the pool in his swimming trunks.

Smiling for the camera in another shot, a black-swimsuit clad Kaley cradled her bump as she reclined in a sun lounger.

People gathered in the comments to shower the mum-to-be with love, with Ashlie Johnson writing: ‘Honestly the most beautiful preggers I’ve ever seen… you shine and radiate nothing but the most beautiful energy with this belly,’ while Ashley Jones wrote: ‘Mama…. Here we go!!! So excited, boo!!!!’

Kaley confirmed the news she was going to be a mum in October, after she was first linked to Tom earlier this year following her split from husband Karl Cook.

Speaking of their budding romance in a chat with Extra, she revealed that it was truly ‘love at first sight’.

‘My manager actually took me as her guest to the Ozark premiere, and I met him there,’ she recalled.

Kaley said it was ‘love at first sight’ with Tom (Picture: Jeff Kravitz/FilmMagic for HBO/HBO MAX)

‘It was like the angels started singing. I was like, “Hallelujah!” It was very magical … it was perfect.’

They later confirmed their relationship in May and cemented it in front of the cameras in September, making their red carpet debut in a loved-up appearance at the Emmys.

The following month, Kaley revealed their baby news, and was showered with love and support by fans and famous pals.

Big Bang Theory co-star Jim Parsons, who played Sheldon Cooper, couldn’t help sharing his delight at her baby joy during an interview on the red carpet.

He told ET Online: ’She’s going to be incredible. She was a mother-like figure to me for many years on Big Bang, even though I’m tremendously older than her.

‘She’s a comforting presence. It was a pleasure to work with her day in and day out.

‘She’s a very warm person, and I think that child is lucky to have her for a mother.’


MORE : Pregnant Kaley Cuoco jokes Tom Pelphrey is already in ‘dad mode’ on romantic babymoon ahead of due date