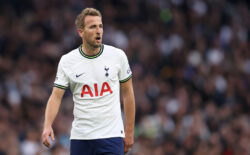 Kane’s current deal at Spurs expires in the summer of 2024 (Picture: Getty)

Jurgen Klinsmann says Harry Kane has a decision to make ‘sooner or later’ over his future but believes Tottenham fans will understand if he wishes to join a new club.

Kane’s current deal expires in the summer of 2024 with Tottenham eager to tie their talisman down to a new deal.

Once again, however, the England international is subject to interest from across Europe.

Manchester City chased the striker during the summer of 2021, seeing four bids rejected by Spurs who stood firm on their £150million valuation.

Bayern Munich are now interested in signing Kane with Manchester United long-term admirers, in desperate need of a new focal point up front.

Kane will turn 30 next summer where Tottenham will be faced with the dilemma of cashing in while they still can or face the possibility of losing him for nothing in 2024.

But the German admits he would also understand if the striker sought a new challenge.

‘I’m a huge, huge fan of Harry. There’s no doubt about it, as we all are at Spurs. It’s a decision that he has to make sooner or later,’ he told The Athletic.

‘He knows he has a very good team right now. He has a very strong-minded manager, so we all hope that he actually starts to win trophies now with Spurs. That’s our hope.

‘But also, I think people would forgive him if he said at a certain point, if it’s next summer or the summer after when his contract is definitely over, that he will move on to a club that might give him a higher probability to win trophies.

‘But I still have that hope that it will happen with Spurs.’

Kane has scored 11 goals in 16 appearances this season for Tottenham with his side sat third in the Premier League, five points behind arch-rivals Arsenal.

Spurs are eager for their striker sign a new contract.